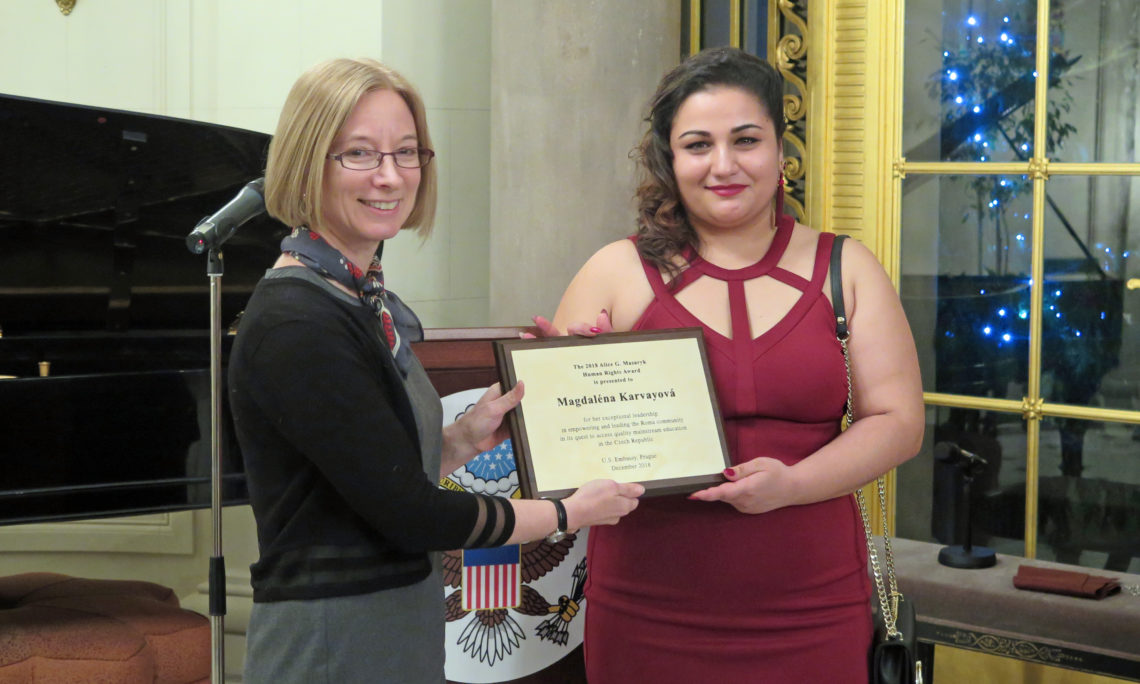 Ms. Karvayova was selected for her leadership efforts in empowering and leading the Roma community in its quest to access quality education in the Czech Republic.  Deputy Chief of Mission Kelly Adams-Smith explained this year’s awardee selection: “Magdalena’s personal story, and her dedication and commitment to mobilizing Roma citizens and parents to take action and demand a better education for their children, is a terrific example of the progress and change citizens can effect when they take their destinies into their own hands.” In the last few years Magdalena and her passionate co-workers have succeeded in enrolling over 600 Roma children into mainstream schools in the Ostrava and Brno areas.

At the ceremony, Ms. Karvayova said: “If it weren’t for my colleagues and people around me, I don’t think I would achieve what I have achieved so far.  I believe there is still a long way to go.  I perceive this award as not only for me, but also for all the people who have supported me on my way to pursue human rights, particularly in the field of equal education and equal access to quality education of Roma children.”

In 2004, the U.S. Embassy in Prague established the Alice Garrigue Masaryk Award to recognize persons and institutions in the Czech Republic who have made an exceptional and continuing contribution to the advancement of human rights in the country through the courageous promotion of social justice and defense of democratic liberties.  The award is presented annually and is named in honor of Alice Garrigue Masaryk, prominent Czech-American humanitarian and founder of the Czechoslovak Red Cross, as a tribute to her devotion to combating social injustice and her personal courage in standing up for human rights.  Alice G. Masaryk is among the great symbols of the history our two countries share, and exemplifies the Czech Republic’s long-standing commitment to human rights, including civic and political rights, at home and abroad.