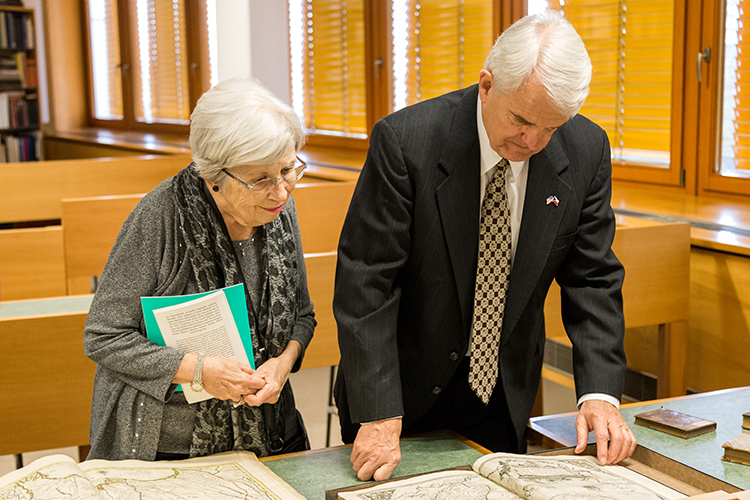 Ambassador King and Mrs. King look at collection of ancient maps at the Moravian Library.

U.S. Ambassador Stephen King really enjoyed his first trip to Brno. He and Mrs. King attended the concert of Wynton Marsalis and his amazing big band, which was hosted by JazzFest Brno. Besides traditional jazz songs performed in modern arrangements, the Marsalis orchestra premiered a new piece based on Antonin Dvorak’s Humoresque in Brno, which was written in cooperation with Czech jazz legend Emil Viklický. The four standing ovations were well-deserved!

During the visit, the Ambassador met with Rector of Masaryk University, Mr. Mikuláš Bek, and Pro-Rector of internationalization, Mr. Ivan Malý to discuss possible cooperation between Masaryk University and U.S. educational institutions. With great interest, the Ambassador learned about innovative approaches applied in the university´s curriculum development as well as the upcoming celebration of the 100th birthday of the university. He will definitely be back soon for more engagements with the students!

During his visit to Moravian Library, which hosts InfoUSA (American library in Brno), Director Tomáš Kubíček showed the Ambassador and Mrs. King the library´s collection of ancient maps where the Ambassador could explore some of the oldest maps of America that are preserved in the Czech Republic, including a map from early explorations in the Americas from 1571. Since 2005, the Moravian Library has cooperated with the U.S. Embassy on cultural and educational programming – and both Ambasssador King and Director Kubíček confirmed that cooperation will continue in the future.

The Ambassador also toured the Cathedral of St. Peter and Paul on Petrov Hill. Director of the Diocesan Museum, Mr. Martin Motycka, kindly guided Mr. and Mrs. King through the cathedral and pointed out some of the architectural highlights as well as history of the site.

The Ambassador also visited the Moravian Gallery which currently is holding the exhibit „Paneland“ on the phenomenon of ‘panelák‘. With extensive commentary by curator Rostislav Koryčánek and the Gallery´s director Jan Press, the Ambassador learned about the housing experiment from the normalization period when the communist government invested heavily in building the blocks of flats.