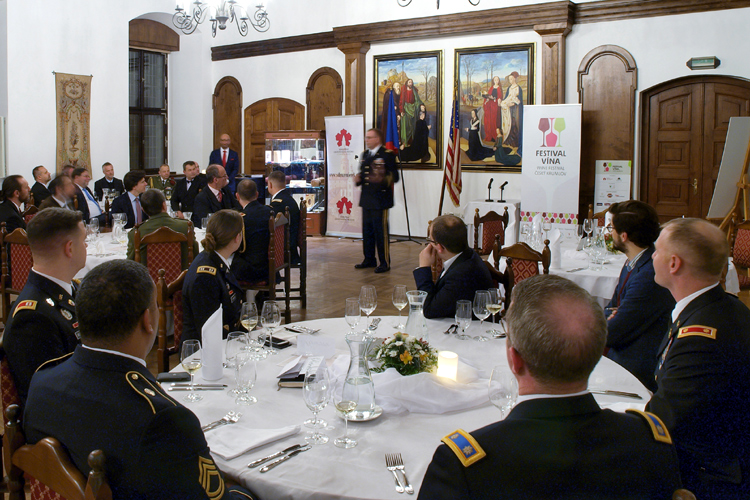 Ambassador Andrew Schapiro and U.S. military commander in Europe Ben Hodges attended a dinner in Cesky Krumlov on November 21 in remembrance of the U.S. army's Thanksgiving Day dinner in 1945.

Ambassador Andrew Schapiro and U.S. military commander in Europe Ben Hodges attended a dinner in Cesky Krumlov on November 21 in remembrance of the U.S. army’s Thanksgiving Day dinner in 1945. The dinner was served in the Ruze (Rose) hotel, which also hosted the dinner for the U.S. liberators on November 22, 1945. The meals served were identical with those in 1945, i.e. baked turkey with potatoes, a pumpkin cake and pineapple and cheese salads, which are traditionally linked to Thanksgiving Day.

Attended by some 50 invited guests, the gala dinner was the first event to mark the anniversary of the post-war Thanksgiving Day celebration by the U.S. soldiers in Cesky Krumlov organised by local tourism association. Last autumn, the organizers staged a soccer match of U.S. soldiers in remembrance of a match that two teams of the U.S. military league played in the town in September 1945.

Thanksgiving Day is celebrated on the fourth Thursday in November to commemorate the first harvest feast shared between Pilgrims (America’s early settlers) and Native Americans. Today the holiday focuses on family life and the things for which we have reason to give thanks. The day preceding Thanksgiving is America’s largest travel day because many families gather to celebrate the holiday together. Families typically enjoy a traditional Thanksgiving meal, which usually includes turkey, cranberries, and pumpkin pie. 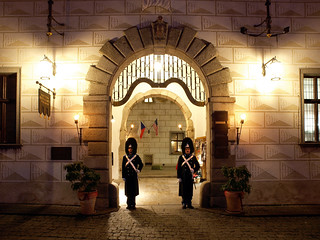