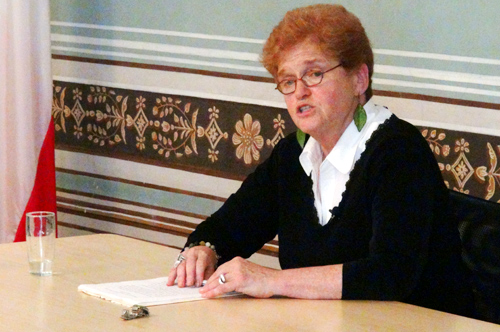 Dr. Deborah Lipstadt speaks at the American Center about the dangers of Holocaust denial theories.

Prominent U.S. historian Deborah Lipstadt visited the Czech Republic on June 13—19 to conduct lectures and debates with Czech academics, students and members of the Czech Jewish community. Dr. Lipstadt, who wrote the books “Denying the Holocaust” and “The Eichmann Trial”, participated in a commemoration event at the Terezin concentration camp and spoke at the American Center about the dangers of Holocaust denial theories.

If you are interested in the seeing a tape of the whole lecture, please contact the American Center at acprague@state.gov.

In an interview for the U.S. Embassy Prague, she highlighted the importance of the individual stories of the Holocaust victims and praised the project “Neighbors Who Disappeared” of the Jewish Museum in Prague.