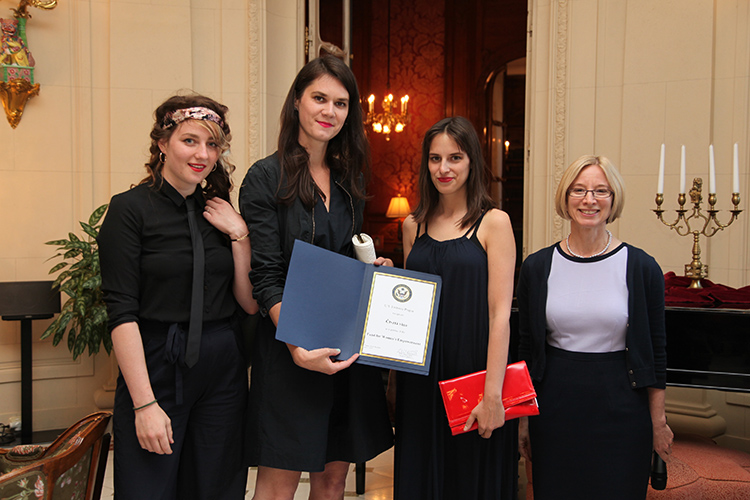 Chargé d’Affaires Kelly Adams-Smith with one of the winners of the U.S. Embassy’s second annual Fund for Women’s Empowerment - The Fourth Wave organisation.

Chargé d’Affaires Kelly Adams-Smith announced on June 7 the four winners of the U.S. Embassy’s second annual Fund for Women’s Empowerment. This fund is aimed at advancing gender equality, removing barriers to leadership opportunities for women, and combatting violence against women.

Ms. Adams-Smith stressed: “The United States believes gender equality is critical to our shared goals of prosperity, stability, and peace. We believe that investing in women and girls worldwide is not just the right thing to do; it’s the smart thing to do. Research shows when governments and societies afford women and girls the opportunity to have a say in the formulation of policies and standards, greater economic growth and stronger societies emerge. Our Embassy has launched a series of initiatives over the past 18 months to raise awareness about fostering greater gender balance in the Czech Republic.”

Winning organizations and their projects:

Spiralis
Women’s Leaders through Social Entrepreneurship – This project will be an intensive, five-month training and mentoring program focused on social entrepreneurship, including U.S. experts to train participants on entrepreneurship, leadership, negotiation, advocacy, and media. More information can be found at www.spiralis.cz.

The Women’s Congress
Women and Public Space: Access and Safety Online and in the Streets – The Women’s Congress plans to raise awareness about women’s right to safety in public spaces by engaging relevant NGOs, the media, and the public. The Women’s Congress will be held in September, in cooperation with the Prague Institute of Planning and Development. More on http://kongreszen.cz/

Czech Women’s Lobby
One Billion Rising / Dance against Violence – One Billion Rising is the world’s largest movement to combat violence against women. Through this program, each year countries around the world express their solidarity with women who are suffering from violence. Czech Women’s Lobby plans to build upon last year’s successful Dancing Against Violence flash dance mob and again convene dancers to raise awareness about violence against women. This will take place in February 2018. More information on http://www.czlobby.cz.

The Fourth Wave
Fourth Wave – The organization plans to produce a series of videos focusing on strengthening the status of women by drawing attention to sexism, stereotypes, and various forms of inequality. The videos, published via social networks, will aim to highlight gender-discriminatory social paradigms and will target a wide audience: youth, students, and the workforce. More information on Fourth Wave’s YouTube channel here.

We congratulate all the winners of our second annual Women’s Empowerment Grant.