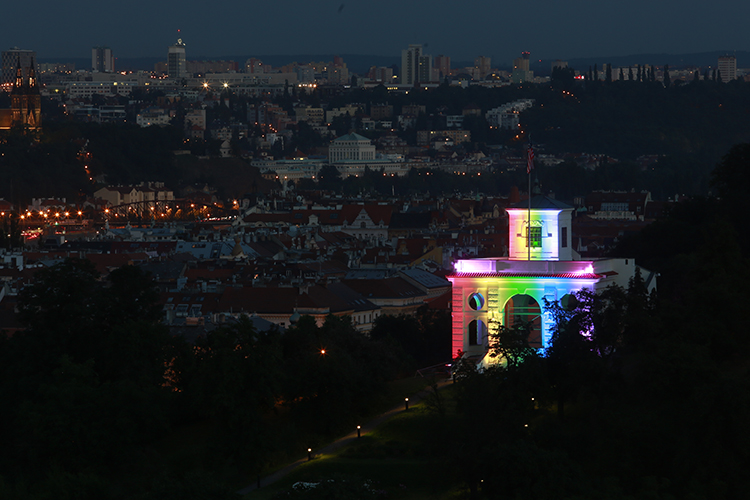 The U.S. Embassy’s Gloriette pavilion illuminated with rainbow-themed colors during the Prague Pride festival in 2013.

The U.S. Embassy in Prague is a proud supporter of the Prague Pride Festival and Pride activities taking place August 7-13 throughout the city. We stand in solidarity with human rights defenders and civil society organizations working around the country to ensure LGBTI persons live with dignity, respect, and freedom.

As part of Pride Week celebrations in Prague, the U.S. Embassy plans to organize the following activities:

On Monday, August 7 at 8:30 p.m., the Embassy’s Glorietta on Petrin Hill will be illuminated in rainbow colors as part of the opening ceremony of the Pride festival. The opening ceremony will take place on Strelecky Ostrov in downtown Prague. United States Chargé d’Affaires Kelly Adams-Smith will deliver welcoming remarks there at 6:50 p.m. More information here.

On Monday, August 7 at 7 p.m., the American Center (Trziste 13, Prague 1) will screen the LGBTI-themed film, Moonlight (2016), an award-winning coming-of-age drama film taking place in the Miami suburbs. More information is on the American Center website. Admission is free.

On Friday, August 11 at 7 p.m., the American Center (Trziste 13, Prague 1) will screen the documentary How to Survive a Plague (2012), an award-winning film that tells the story of how AIDS changed from a death sentence to a survivable disease. After the screening, director David France will discuss the documentary and take questions from the audience. More is found on the American Center website. Admission is free.