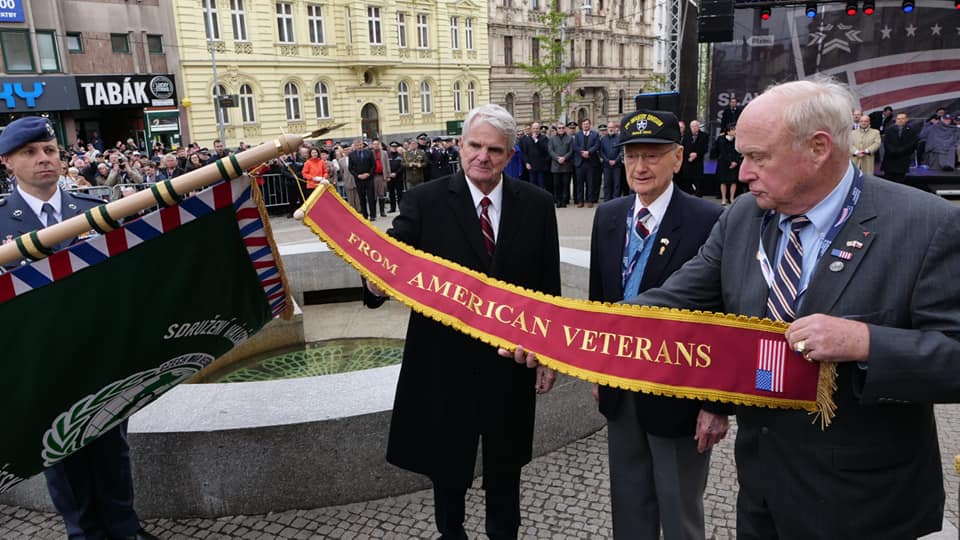 Diplomats from the United States Embassy in Prague attended events primarily in western and souther parts of Bohemia commemorating the liberation by the U.S. Third Army commanded by General Patton. They attended ceremonies in 38 municipalities.  For Americans, it is always very special to commemorate those who fought and sacrificed their lives to protect the values we all share:  freedom, democracy, and respect for human dignity.

Even 74 years after the end of the twentieth century’s bloodiest war, it is necessary to remember horrors of war – in order to prevent them from happening again.  It is our obligation to pay respect to the brave men and women – Americans, Czechs, and many others – who fought together as Allies to ensure the freedom and security of future generations in Europe, in North America, and beyond.  Many of them paid the ultimate price for their bravery.

At the main ceremony in Pilsen, on May 6, the U.S. Ambassador Stephen King said: “Through this commemoration today, we help preserve, defend and pass on the fruits of their selfless actions – fruits such as our freedoms, our democracies, universal human rights, and our collective security.”

An effective defense must start from a position of unity and strength.  This year,  NATO celebrates its 70th anniversary as a democratic force for peace and stability.  Originally, the Alliance worked to counter-balance the expansionist intentions of Communist regimes after World War II.   But when the Cold War ended, the need for NATO did not.  The world today is not free of threats to our shared, democratic values.  Twenty years ago, NATO took a major leap forward as the Czech Republic and other nations joined the Alliance.  During those twenty years, the Czech Republic has become a highly respected and appreciated NATO member – an ally who stands shoulder-to-shoulder with our soldiers from the Baltics to Afghanistan.

In front of U.S. and Belgian veterans in Plsen, U.S. Ambassador Stephen King said: “The strong cooperation between the United States and the Czech Republic embodies the very same values that so many young soldiers, sailors, airmen, and marines fought and died for in World War II.  Our role is to respect their sacrifice and to protect the democratic legacy they left to our care.”