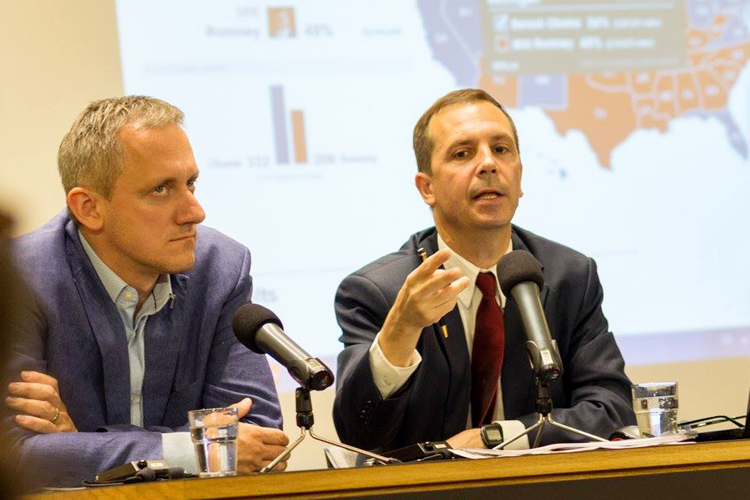 Political-economic counselor Jim Merz and former U.S. correspondent Michal Kubal answer the questions during a discussion with participants of at the Summer School of Journalism in Havlickuv Brod.

Political-economic counselor Jim Merz participated in a discussion with Czech Television prime-time newscaster and former U.S. correspondent Michal Kubal about the upcoming U.S. presidential elections at the Summer School of Journalism in Havlickuv Brod, Vysocina Region. Mr. Merz introduced the complexity of presidential elections in the United States, explaining in detail the differences from the Czech system. Mr. Kubal spoke about his personal experience as a journalist covering the elections from a foreign perspective; this year will be his third time covering U.S. presidential elections. Both speakers confirmed that traditional media play a key part of the election campaign; however, the role and influence of social media has been significantly increasing.

The Summer School of Journalism has been organized annually for 12 years. This year, 60 participants from the Czech Republic, Ukraine, Belarus, and Slovakia took classes. In the week-long program, participants learn the principles of journalism, discuss the latest trends in print, electronic, and new media. Lecturers have included not only prominent Czech and foreign journalists and experts, but also diplomats and think-tankers, among them former Czech President Vaclav Havel and representatives from the U.S. Embassy in Prague.