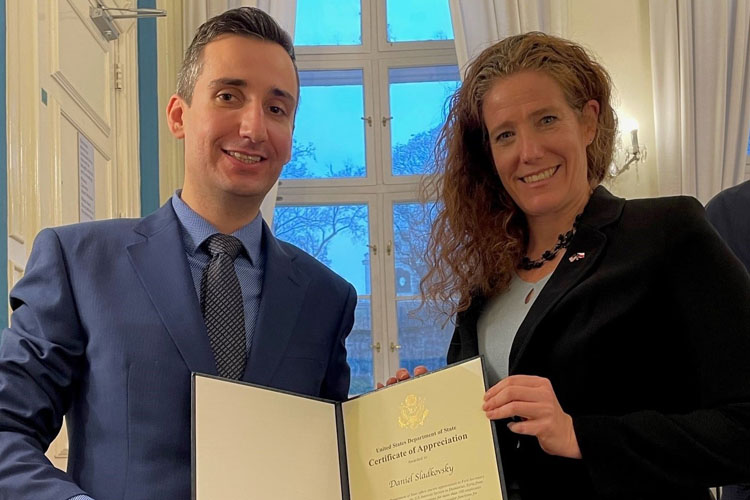 Chargé d’affaires Jennifer Bachus presented Daniel Sladkovsky, First Secretary at the Czech Ministry of Foreign Affairs, with a certificate of appreciation in recognition of his commitment and courage as leader of the United States interest section in Damascus, Syria. From 2016 to 2021 Mr. Sladkovsky managed operations for more than 100 local U.S. government employees protecting U.S. Embassy property and supporting consular functions for American citizens.

During an award ceremony at the U.S. Embassy, Bachus also expressed appreciation to the Czech Republic for its assistance in Syria.

“We are deeply grateful for Mr. Sladkovsky’s commitment and extreme resilience, despite instability due to the ongoing Syrian civil war and COVID-19,” said Bachus. “The United States is fortunate to have a firm Ally and friend in the Czech Republic to represent U.S. interests and assist American citizens in Syria.”

The Czech Republic has served as the protecting power for U.S. interests in Syria since 2012, when the U.S. Embassy in Damascus suspended operations. Chargé d’affaires Bachus presented Mr. Sladkovsky with the certificate on behalf of the U.S. State Department’s Bureau of Near Eastern Affairs.