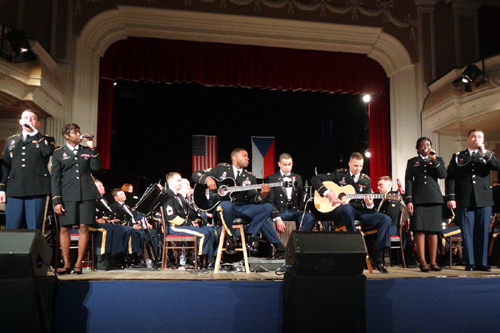 On Friday, February 27, the U.S. Army Europe Band and Chorus, based in Germany, performed in the concert hall Peklo in Pilsen. During their program “Sounds of America”, they introduced a selection of the best of American music for large orchestras.

The band performed Rhapsody in Blue by George Gershwin with a piano solo by U.S. Army Specialist Josef Vacula, a native from Trebic, Vysocina Region; world-renowned classics by Glenn Miller; and famous marches by John Philip Sousa. The encore “When the Saints Go Marching In” had the audience on their feet for multiple standing ovations.

This year the city of Pilsen celebrates the 70th anniversary of the liberation from Nazi oppression in 1945 by the U.S. Army. The city is also the European Capital of Culture for 2015. In her welcome remarks, Deputy Mayor of Pilsen Eva Herinkova called the event a very special opportunity.

Deputy Chief of Mission at the U.S. Embassy in Prague Steven Kashkett said: “When the band contacted us and said their wanted to perform in the Czech Republic, we at the Embassy responded that they must perform in Pilsen because the city occupies a special place in the history of the friendship between our two nations.”

On Saturday, May 2, the Dixieland group of the U.S. Army Europe Band will be preforming at the Pilsen main square Namesti Republiky, as one of the key performers during the Liberation Festival concert.