In Cesky Krumlov, Americans and Czechs commemorated an American football match played in the town at the end of World War II.  In September 1945, two U.S. Army units played; last Saturday, Czech national champions – the Prague Black Panthers – fought with the team of the U.S. Army Dragoons on the playing field.

The Americans won 35:0. U.S. Commander Tim Payment noted: “The match was a good experience for us.  The main thing is that we have followed in the footsteps of those who played American football here shortly after the war.”

On Sunday, the Czech and American teams played a friendly match of football, called soccer in the U.S.  – the Czechs won 18:1.  “While the U.S. team dominated in American football – a traditional American sport, the Czechs dominated in soccer,” Chargé Kashkett commented.

The historical atmosphere was highlighted by a nearby World War II-era military camp.

The U.S. Embassy in Prague provided auspices to the event and assisted the organizers. 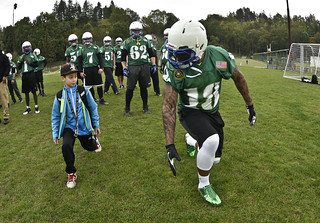