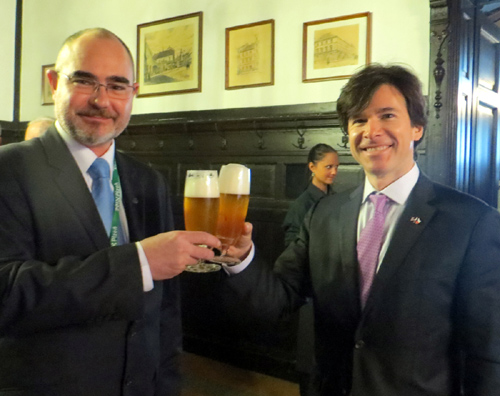 Ambassador Andrew H. Schapiro participated in the day-long festivities in Pilsen, Czech Republic on Saturday, January 17th as the city celebrated the opening of their year as the European Capital of Culture for 2015.

American Cultural Attaché Sherry Keneson-Hall joined Ambassador Schapiro and 16 other Ambassadors, Senior Czech government officials, and thousands of visitors for a variety of events. The evening culminated in an amazing light show and opening ceremony on Namesti Republiky, where video mapping provided 3d images on 2 sides of the square and on the town’s cathedral.

The American diplomats felt particularly honored to see a tribute to General George S. Patton and the U.S. Third Army who liberated the town in 1945 from Nazi control. Projected images of American flags unfurled down the cathedral and all over the square and the crowd cheered as old film footage showed the U.S. tanks rolling through the town.

Ambassador Schapiro commented “I want to make sure that all American tourists arriving to the country are aware of the European Capital of Culture. We are really pleased about this because Pilsen and America have historic ties.”

The diplomats visited the famous Pilsner brewery, toured an exhibition about famous animator Jiri Trnka, and listened to the famous Plzen-born singer and writer Jiri Suchy.