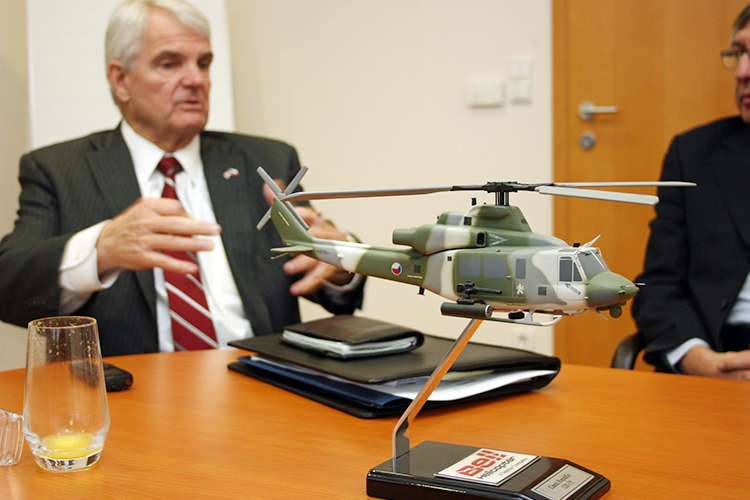 The Ambassador added that he is also visiting Bell to show his strong support for the U.S. offer of Bell Helicopters, and to reiterate his belief that the UH-1Y helicopters offered will bring significant and unmatched security benefits to the Czech Republic. In discussions with Bell officials, Ambassador King thanked them for their long-term investment in the Czech Republic, and emphasized how the UH-1Y procurement would create employment opportunities for both Czech and U.S. workers. Ambassador King views Bell’s operation here as a great model for U.S. companies to partner with Czech companies and support economic opportunities that benefit both countries.

Ambassador King told Bell officials he was excited by the potential for even greater strategic cooperation, should the Czech Ministry of Defense buy the Bell UH-1Y helicopter through a government-to-government agreement. Following nearly four years of transparent, in-depth consultations between U.S. and Czech Defense officials, and a formal request from the Czech Ministry of Defense, the U.S. Department of Defense responded with an offer of the UH-1Y, the U.S. Marine Corps standard all-weather, combat-proven multi-role helicopter.

Ambassador King expounded on the merits of the UH-1Y, “The UH-1Y is a proven combat aircraft with advanced integrated and precision-guided weapons systems capability. This is the aircraft that we trust to bring our sons and daughters home from difficult missions ranging from combat to rescue missions in bad weather. But buying the aircraft means so much more. It shows the Czech Republic is serious about improving its combat capabilities, modernizing its fleet, and integrating with its western partners. I can tell you there is considerable excitement back home on this substantive opportunity to collaborate with a NATO ally in this meaningful way. I also want to emphasize that the price of the offer includes much more than just aircraft. Our ‘Total Package Approach’ includes training, weapons, communications and survivability equipment, spare parts, logistical support, and upgrades as the United States upgrades its fleet. This approach ensures that the Czech Air Force will receive a trusted and modern helicopter that will significantly enhance the capabilities of the Czech military.”

The Czech defense industry will directly benefit by partnering with the USA on the UH-1Y. Bell Helicopter signed a Memorandum of Understanding with LOM Praha in June 2015 to provide maintenance and training activities on the UH-1Y helicopters.

One of Ambassador King’s top priorities is to increase economic opportunities between the Czech Republic and the United States. His visit to Bell Helicopter in Prague shows his commitment to the priority of promoting mutually beneficial relations.