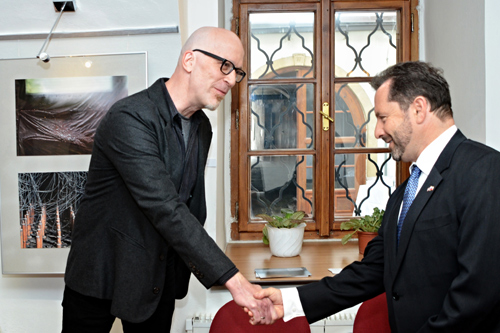 The Europa House Gallery in Pilsen is featuring a photography exhibition by Michael Borek, a photographer and interpreter based in Washington, D.C. who is originally from Prague. The Pilsen exhibition introduces works from his projects Wide Asleep/Half Awake, Urbania, Scranton Lace, and What Would Sudek Do? which were shown at the American Center in Prague in 2013.

The exhibition will be open till the end of May.

During the last three years, his photographs from the abandoned lace factory in Scranton, Pennsylvania, were selected for juried shows by curators from the Corcoran, Whitney, Hirshorn, Getty, and Phillips Museums.  One of them won the second prize in the international competition of FotoWeek DC.

In 2006, Michal Borek became a member of the Multiple Exposures Gallery in the Torpedo Factory in Alexandria, Virginia.  In 2008, he had a solo exhibition at the Czech Embassy in Washington, DC, and, in 2009, he was a featured artist in the Rayko Gallery in San Francisco. In 2011, one of Borek’s solo exhibitions was ranked as one of the ten best photography shows in Washington, by photography critic Louis Jacobson.

This June, Michael Borek’s solo exhibition will open at the Czech Embassy in Washington D.C. under the title “They Never Update the Lists”, focusing on the theme of alienation in relation to the 90th anniversary of Franz Kafka’s death.