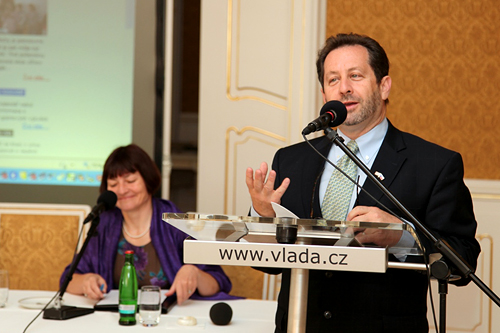 Over 100 people gathered at the Lichtenstein Palace in Prague on June 2, to participate in a conference focusing on sharing best practices to integrate minorities. Ministers, mayors, civil servants, activists from the Czech Republic and Slovakia, and foreign diplomats met to share their experiences to bring communities together.

The conference created a space for practical discussion and exchange of creative solutions to minority integration challenges, while offering ideas onhow and why to provide social services, how and why to create a social firm or “social housing” concept. It also offered information on what support different ministries, police, and civil society can provide to local governments not only during local unrest, but throughout the year.

Local government representatives from both countries, who know first-hand the long-term consequences if these problems are left unresolved, shared their experiences and ideas from their towns and villages and described the costs of some policies in place that affect Roma.  Speakers, including Mayor Drahomira Miklosova of Obrnice, Mayor Ledecky from Spissky Hrnov, and Head of the Social Department for Prague 14 David Benak agreed that any kind of integration requires complex solutions.

That evening, Chargé d’Affaires of the United States Steven Kashkett presented Mayor Miklošová with a plaque in honor of her nomination for the 2014 Secretary of State’s International Women of Courage Award. He congratulated her for her perseverance confronting stereotypes and discrimination against the Roma minority in Northern Bohemia, and for pushing for better government for all citizens, regardless of race, religion or ethnicity.

The conference was organized by the U.S. Embassy in Prague and the Agency for Social Inclusion, supported by the ROMEA NGO. The program of the conference, presentations, and photos can be found here.