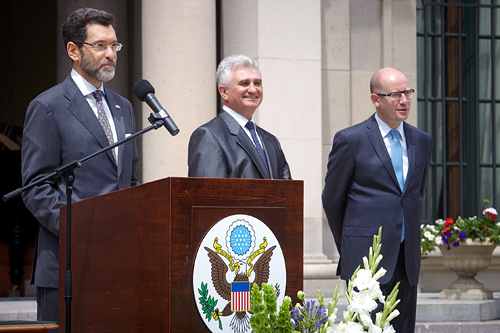 Ambassador Norman Eisen delivers his remarks at the Fourth of July reception held at the Ambassador's residence in Prague on July 2, 2014.

Ambassador Norman Eisen hosted the traditional Independence Day reception at the Ambassador’s residence in Prague on July 2, where he welcomed hundreds of respected guests from all walks of life.

“Our nations’ great friendship is clearly evident in our work with you bilaterally and multilaterally on the security of Europe and the world,” said the Ambassador in his remarks.

“It has been an honor to work on that shared mission with both Czech Presidents with whom I have served; all three Prime Ministers and Foreign Ministers during my time here; many other government and opposition leaders; and all of you in and outside of government who are here, whether you are in business, labor, civil society, the press or just regular folks,” said the Ambassador.

The complete speech can be found here.

The United States celebrates the formation of the world’s oldest democracy each year on the fourth of July. On this day in 1776 the Second Continental Congress adopted the Declaration of Independence, which asserted America’s independence by declaring some of the basic rights of man and listing grievances against the British Empire.

America’s birthday is celebrated by traditional activities such as parades, concerts, picnics, and fireworks displays. For more information about the holiday, please see our Independence Day page.