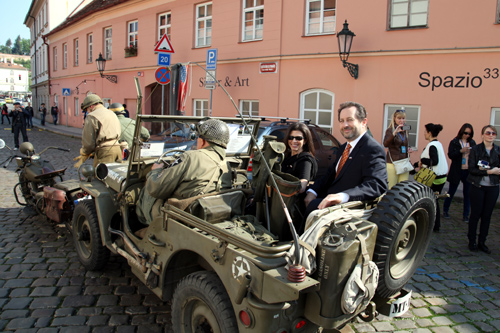 Charge d’Affaires Steven Kashkett and his wife Wendy join the Convoy as it travels to the U.S. Embassy.

The U.S. Embassy in Prague welcomed today the Convoy of Liberty to its doorstep as part of ongoing commemorations marking the end of World War II.  Over two hundred spectators joined the festivities, admiring the convoy of restored military vehicles – driven by a dedicated group of men and women who donned period uniforms that American troops wore during the World War II liberation.  The Czech Army Band played a selection of period music from the era.

U.S. Embassy Chargé d’Affaires Steven Kashkett in his remarks said: “Your presence here today is a reminder of an important period in our shared history.  The Convoy of Liberty offers us an opportunity for deep reflection on our shared sacrifices endured so many years ago, and on our shared commitment to freedom and prosperity.  Today, that shared commitment continues.  The United States and the Czech Republic remain steadfast allies and partners as we and other nations confront new challenges to peace and security, some very near to our doorstep.”

The last Friday in April traditionally begins the Convoy’s tour around locations in western Bohemia that were liberated by General Patton’s Third Army.  The tour will conclude on Sunday, May 4 in a parade during the  Pilsen Liberation Festival.