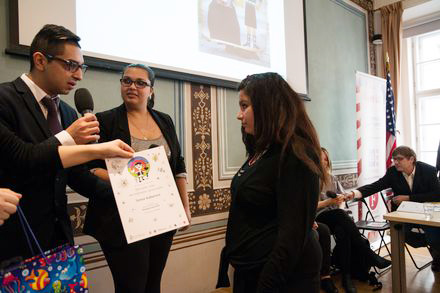 American Center hosted the Award Ceremony of the 17th Romano Suno (Romani Dream) Contest on December 11th, 2014. The literary and art contest is organized by the NGO Nová škola (New School) and one of its main aims is to motivate Roma kids and teenagers to express themselves, their experience of the world around them in Romani language, a laguage which is rarely used in the public space in the Czech Republic and thus raise the awareness of Romani language as a fully-fledged language.

US Ambassador Andrew Schapiro spoke to the children about the importance to cherish Romani language culture which is of a great value not only to the Roma but to the Czech Republic and the world as such. Romano suno 2014 was realized with support of the US Embassy grant as well as the support from the Office of the Government of the Czech Republic.