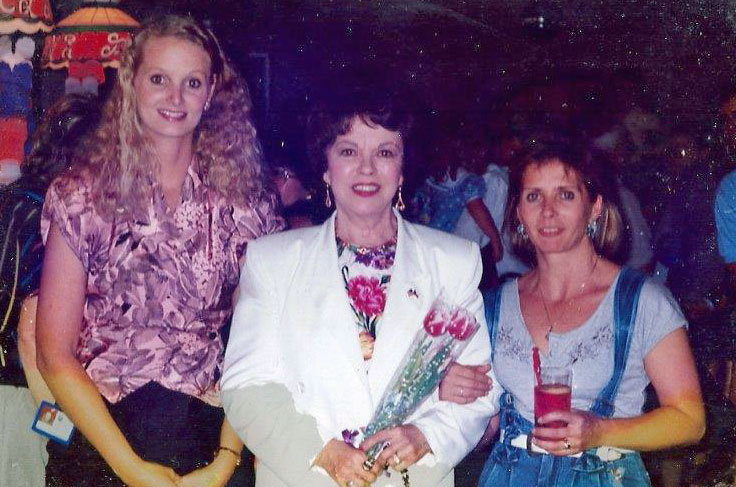 Ambassador Shirley Temple Black with the employees of the U.S. Embassy Prague.

U.S. Ambassador Shirley Temple Black was an icon.  She upheld the highest standards of poise and class, and will be missed. By the time Ambassador Black was assigned to serve in Czechoslovakia in 1989, she was already a seasoned diplomat who had worked in Ghana and as the State Department’s Chief of Protocol.  Here she captured the hearts of the Czech and Slovak people. As a tribute, we asked Americans and Czechs who had worked or met with Ambassador Black to share their memories of this iconic actress and diplomat.

“I remember having lunch with her just after the Velvet Revolution.  She was charming, one of the least pretentious people I’ve ever met,“ recalls New York University musicologist Mike Beckerman.

Office Management Specialist Nelia Hill, had the privilege of working for Ambassador Shirley Temple Black, and has many great stories about her former boss.    According to Nelia, Black loved telling stories about Hollywood and her film career over her embassy cafeteria lunch, which consisted of that typically American combination of a hamburger, fries, and a coke.

During an embassy Easter egg hunt, Nelia’s daughter Stephanie was assigned to dress as the Easter bunny.  Stephanie had difficulty adjusting her oversized bunny-rabbit suit and the head piece would not allow her to see the children to whom she was passing-out candies.  Ambassador Shirley Temple Black noticed the problem, and went to the girl’s aid by pushing the head piece into position. The Ambassador remarked, “You’re doing a great job.  I wore a similar costume when I was your age and had the same problem.”

Nelia noted how embassy management advised the staff to refrain from dressing their daughters to resemble Shirley Temple’s “Dimples” character.  Singing was particularly frowned-upon.  However, one embassy mom didn’t get the message.  Her four-year old daughter came to the Easter event wearing an adorable ruffled pink dress with her hair in curls.  The mother asked her daughter to serenade Ambassador Black with her rendition of “On the Good Ship Lollipop”.  According to Nelia, you could hear a pin drop.  Ambassador Black smiled and sang along with the little girl.

Zuzana Willits worked with Ambassador Black from 1991 to 1992 and offered these remarks, “She was a great person who talked to all of us … Morale was high and everybody loved her…amazingly, she always remembered everyone’s first name… Memories of Ambassador Black will remain forever in my heart.”

Another embassy employee, Zuzana Kucerova, began her career with during Ambassador Black’s tenure, she wrote that the former Chief of Mission had a small plaque on the door to her office with the initials “STB”.  These were of course her initials – as well as the acronym for Czechoslovakia’s communist-era secret police.

Markos Kounalakis, a research fellow at Stanford University’s Hoover Institution and a Newsweek reporter in Prague from 1989 to 1991, is a Shirley Temple fan who admired her diplomatic prowess.  Kounalakis saw Ambassador Shirley Temple Black up-close, both during and after the Velvet Revolution, calling her “the right person at the right time,” at seminal moment in modern Czechoslovak history.

According to Kounalakis, “Her personal and informal style worked well with the new government, made up of formerly imprisoned, hard laboring and human rights Charter 77-signing artists, musicians, actors and a playwright president named Vaclav Havel. Many of those new Czechoslovak political leaders admired their American colleague, President Ronald Reagan, an actor-politician like themselves who expressed in the clearest terms – and to the whole world – their deepest desire for freedom.”

“During early street protests in Prague in 1989, she spoke out for more democratic freedom and in thinly veiled language against the Husak government to which she was credentialed. And as the Berlin Wall fell and the distinct scent of revolution filled the Eastern European air, people filled central Wenceslas Square and jangled their keys in protest. Shaking those keys meant that they wanted to lock out the communists and open the door to democracy. Suddenly she became the U.S. ambassador to a reborn and dramatically transitioning state.

Thankfully, she knew something about drama.  When it came to the new Czechoslovak leadership, she knew these people and what motivated them, understood their anti-establishment tendencies, and gained their respect not merely because of her recognized early film work, but also because her ability to take the stage and perform whatever diplomatic duties were necessary.”

Finally, a Shirley Temple Black fan who wishes to remain anonymous tells the following poignant story:  “Shortly after communism fell in Czechoslovakia, a seated Ambassador Black called her senior staff together into a private, closed-door meeting. Looking them sternly in the eye, she told them ‘I’m only going to do this once, just once.’  And with that, she stood up, smiled, and pranced around the room singing ‘On the Good Ship Lollypop’.”

Ambassador Black leaves behind good memories of a great diplomat and she will be missed.