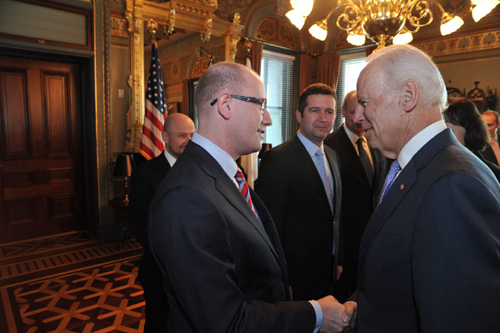 Vice President Joe Biden met on November 18, 2014 with Czech Prime Minister Bohuslav Sobotka to discuss bilateral relations, the crisis in Ukraine, and European energy security. The Vice President expressed appreciation for the Czech Republic’s contributions to international security in Afghanistan and Iraq, and discussed the importance of strengthening the NATO Alliance to respond to emerging challenges. In this regard, the Vice President noted the importance of allies reinvesting in defense and better sharing the cost of security.

The Vice President underscored the importance of imposing costs on Russia for its continued violations of Ukraine’s sovereignty and territorial integrity, as well as its blatant disregard for the commitments it undertook in the September 5 Minsk agreement, particularly with regard to the withdrawal of Russian troops from Ukrainian territory. The two leaders also agreed on the importance of bolstering Europe’s energy security and creating a true market for natural gas in Europe.

Finally, on the 25th anniversary of the Velvet Revolution the Vice President conveyed his profound admiration for the late Czech President Vaclav Havel, whose legacy is being commemorated on Capitol Hill this week, and who served as a champion for countless human rights advocates who believe in the “power of the powerless.”