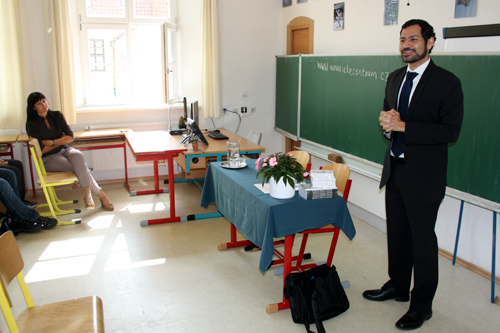 Press Attaché Daniel Ernst discusses with high school students in Ceske Budejovice the life of a U.S. diplomat in the Czech Republic.

Discussions at local high schools and visits to U.S. enterprises were the main items on the agenda of U.S. Embassy Prague Press Attaché Daniel Ernst’s visit to South Bohemia on June 2-3.

In Prachatice and in Ceske Budejovice, he discussed with students of local high schools the life of a U.S. diplomat in the Czech Republic and he summed up the main points of U.S. geography and history;  in Volary, the Press Attaché paid tribute to Charles Havlat, one of the last U.S. soldiers killed in the Second World War in Europe, and to female victims of the April 1945 death march that ended in Volary.

In Cesky Krumlov and Blatna he inspected Lira and Dura Auto companies, which are subsidiaries of U.S.-based firms and major regional employers.  In Ceske Budejovice, Daniel Ernst also met with representatives of the energy policy and environment-focused NGO, Calla.