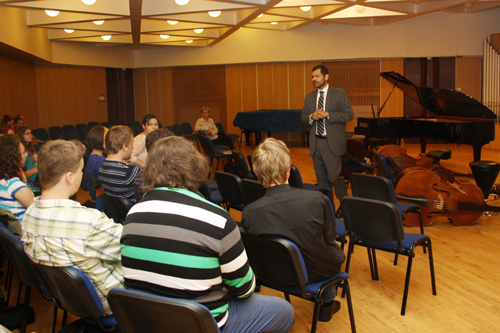 U.S. Embassy Prague Press Attaché Daniel Ernst discusses with students of the Pardubice Conservatory the life of a U.S. diplomat.

Discussions at local schools and meeting regional media outlets were the main items on the agenda of  U.S. Embassy Prague Press Attaché Daniel Ernst’s visit to East Bohemia on June 25—26.

Against the backdrop of students’ musical performances at the Pardubice Conservatory, Mr. Ernst shared his experience with pursuing a musical career as well as mutual musical interests. The discussion with students of the Hradec Kralové Biskupské Gymnázium was more about the life of a U.S. diplomat in the Czech Republic and the main issues of U.S. geography and history.

Experts at the Geographic and Hydrometeorology Institute, which closely collaborates with its NATO counterparts on projects in the world’s hotspots Afghanistan, Iraq, Kosovo and Iran, explained the role Czechs play in NATO’s cartography divisions.