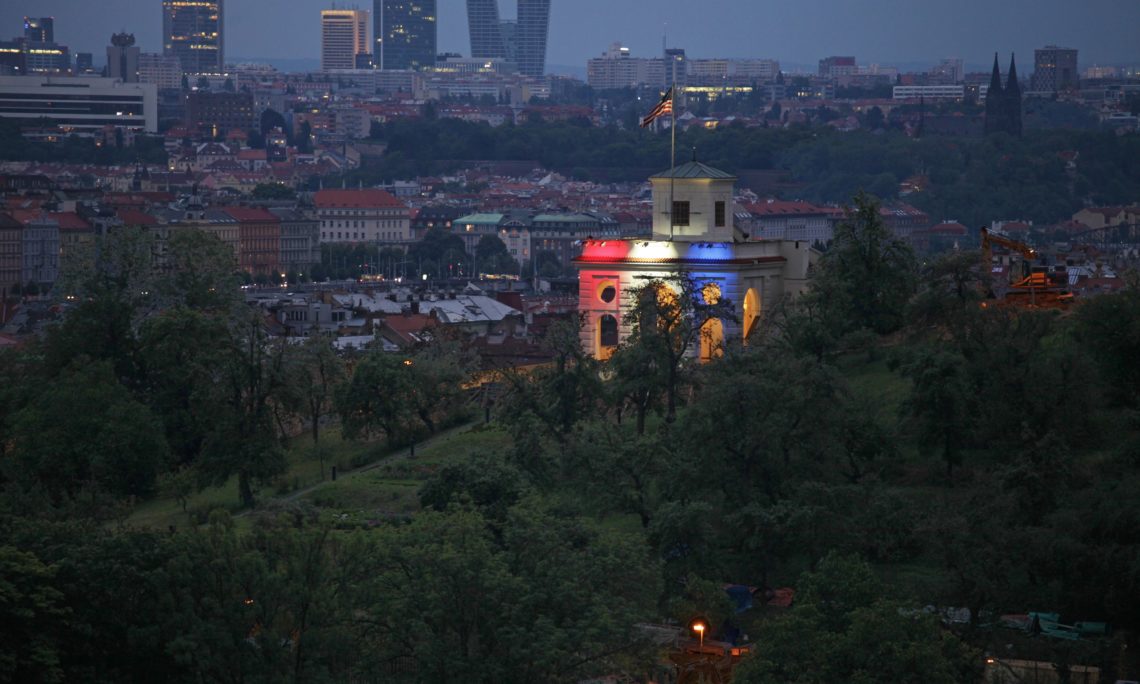 Prague, June 29  – U.S. and Czechoslovak Presidents Woodrow Wilson and Tomáš Garrigue Masaryk (portrayed by actors from the Prague Shakespeare Company) celebrated the 242th anniversary of the Independence of the United States of America at a reception hosted at U.S. Ambassador’s residence in Prague.

Presidents Wilson and Masaryk, accompanied by U.S. Ambassador Stephen King celebrated not only the anniversary, but also marked a centennial of Czech-American diplomatic relations.  One hundred years ago, Czechoslovakia declared its independence, and shortly thereafter, the United States established formal diplomatic relations with the new country.

Both Presidents Wilson and Masaryk enjoyed the evening and presented key moments of our shared history and relations 100 years ago.

In his speech, Ambassador King commented: “Let us celebrate our one hundred years of friendship, through times easy and difficult.  But let us also look forward to our next hundred years in friendship, and to continue to think of ways we can work together to strengthen our partnership.  I view the U.S.-Czech relationship as a three-legged stool – each leg of the stool is of critical importance – friendship, security, and economic prosperity.  The most important of these three, though, is undoubtedly friendship.”

In addition, Ambassador King announced that, in honor of the U.S.-Czech centennial celebrations this year, the Glorietta, which stands behind the Embassy in Prague – Mala Strana, will be lit in the Czech and American colors of red, white, and blue for the rest of the year.

Finally, in recognition to those Czechs who work hard every day to keep our relationship strong, Ambassador King launched the 2018 Centennial Awards to honor living Czechs who have contributed to the U.S.-Czech relationship in the fields of enhancing security; advancing commercial and economic ties; and promoting collaboration in culture and education.  The Embassy will announce the winners during our Centennial Week in November.