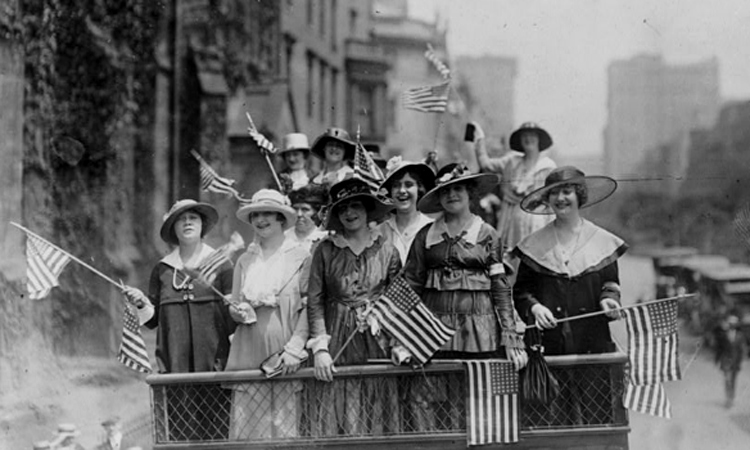 The Embassy is soliciting proposals with outstanding merit that aim to promote gender equality, remove barriers to leadership opportunities and combat stereotypes, including by engaging men in these efforts. More information on the Women’s Empowerment Grant page.

1776 Abigail Adams is an early champion of women’s rights. In a letter to her husband John Adams — who later becomes the second U.S. president — she urges lawmakers of the Continental Congress to “Remember the Ladies…. Do not put such unlimited power into the hands of the Husbands.”
Related article: “Abigail Smith Adams: ‘Remember the Ladies’“

1848 U.S. Women’s Rights Movement is sparked at a convention in Seneca Falls, New York. Delegates issue a Declaration of Sentiments calling for equality with men, including the right to vote.
Related articles: “Seneca Falls Convention Began Women’s Right’s Movement“ and “A Woman’s Right To Vote“

1849 Elizabeth Blackwell is the first woman to graduate from medical school in the United States. She becomes a pioneer in women’s education in medicine.

1851 Abolitionist and former slave Sojourner Truth gives her famous Ain’t I a Woman? speech to the Ohio Women’s Rights Convention. She is an eloquent champion of the rights of African Americans and women.
Related article: “Sojourner Truth: Antislavery Activist, Advocate of Women’s Rights“

1869 Wyoming, then a U.S. territory, is the first jurisdiction to grant women the right to vote. Many Wyoming legislators — all male — hope it will attract more single marriageable women to the region.

1870  Ellen Swallow Richards is the first woman in America accepted to any school of science and technology (Massachusetts Institute of Technology).  She becomes a pioneer in sanitary engineering and a founder of home economics in the United States.

1878 Soprano Marie Seilka is the first African-American artist to perform in the White House; she sings for President Rutherford B. Hayes.

1881 Clara Barton founds the American Red Cross, expanding on the original concept of the International Red Cross to include assisting in national disasters as well as wars.
Related article: “Clara Harlowe Barton“

1887 Journalist Nellie Bly pioneers investigative journalism. As a reporter for the New York World, she feigns insanity and is committed to a women’s insane asylum to expose abusive conditions. In 1889, she circles the globe in 72 days, a world record.
Related article: “Nellie Bly“

1900  Golfer Margaret Abbott is the first American woman to win a medal in the Olympics.  At the Paris games, she takes the gold medal.

1916 Jeannette Rankin of Montana is the first woman elected to Congress, serving two nonconsecutive terms. She casts the only vote in Congress against war on Japan after the 1941 attack on Pearl Harbor.
Related article: “Jeannette Pickering Rankin“

1925 Nellie Tayloe Ross is the first woman governor of a state (Wyoming). In 1933, she is appointed first female director of the U.S. Mint.

1926 Gertrude Ederle is the first woman to swim the English Channel. Only five men swam the Channel before her, and she cuts two hours off their fastest time.

1931 Jane Addams is the first American woman to receive the Nobel Peace Prize. Addams is an advocate for the poor, a pacifist, a reformer and a feminist.
Related article: “Jane Addams“

1932 Amelia Earhart makes the first solo flight by a woman across the Atlantic. She is the first woman to be awarded the Distinguished Flying Cross.
Related item: Photo Gallery: Great Women of the Twentieth Century

1933 Frances Perkins is sworn in as secretary of labor. She was appointed by Franklin Delano Roosevelt as the first woman ever to serve in the U.S. Cabinet.

1933 Eleanor Roosevelt transforms the role of first lady during her husband Franklin Delano Roosevelt’s presidency. She is the first president’s wife to hold regular press conferences and go on the lecture circuit, and her social activism gives a voice to the powerless: minorities, women and disadvantaged.
Related article: “Anna Eleanor Roosevelt“

1953 Jacqueline Cochran is the first woman to break the sound barrier. During her career, she sets more speed and altitude records than any of her contemporaries, male or female.

1955 Rosa Parks is arrested in Montgomery, Alabama, for refusing to give up her seat on a bus to a white man, thus sparking the U.S. civil rights movement.
Related article: “U.S. Marks 50th Anniversary of Montgomery Bus Boycott“

1955 Marian Anderson becomes the first black person, American or otherwise, to perform at the Metropolitan Opera in New York City.  (Her famous open-air concert on the steps of the Lincoln Memorial in Washington took place on Easter Sunday, 1939.)

1983 Astronaut Sally Ride is the first American woman in space, flying on the shuttle Challenger. She flies a second shuttle mission in 1984.
Related article: “Women Star in Cosmic Quest“

1984 Geraldine Ferraro becomes the first woman nominated for vice president by a major party (Democrat) when she is selected as Walter Mondale’s running mate.

1989 Ileana Ros-Lehtinen of Florida is the first Hispanic-American woman elected to Congress.

1997 Madeleine Albright is sworn is as the first woman U.S. secretary of state. Born in Prague, Czechoslovakia, she became a U.S. citizen in 1957.

2001 Elaine Chao becomes secretary of labor, the first Asian-American woman to be appointed to a president’s Cabinet in American history.

2005 Condoleezza Rice is the first African-American woman to serve as U.S. secretary of state.

2007 Nancy Pelosi is sworn in as the first female speaker of the U.S. House of Representatives, one of the most powerful posts in the U.S. government.
Related article: “First Female Speaker to Preside at State of Union“

2007-2008 Hillary Rodham Clinton is the first woman to become a leading candidate for a presidential nomination, mounting a fierce challenge against Barack Obama, the ultimate winner of the Democratic Party’s nomination and election. In 2009, Clinton is sworn in as secretary of state, becoming the first former first lady to serve in a president’s Cabinet.
Related items: “Secretary of State Hillary Clinton Calls for Robust Diplomacy“ and Photo Gallery: Women in Government