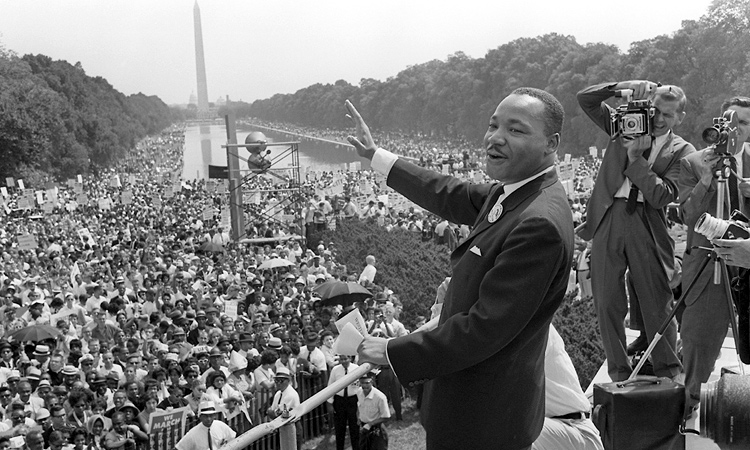 It was a speech that the world cannot forget. On August 28, 1963, an estimated 250,000 people marched to the Lincoln Memorial in Washington where they heard Martin Luther King Jr. give a speech destined to resonate through the ages.

In what became known as the “I Have a Dream” speech, King gave impassioned voice to the demands of the U.S. Civil Rights Movement — equal rights for all citizens, regardless of the color of their skin.

Some historians maintain that King’s speech, delivered at one of the largest civil rights demonstrations in U.S. history, was one of those rare moments that changed a nation — paving the way for a transformation of American law and life.

“It was a very peaceful day. A sea of white as well as black faces enveloped the Mall,” the late Dorothy Height, president emeritus of the National Council of Negro Women (NCNW), wrote in 2005. Height, one of the march’s organizers, sat behind King on the platform. “I think it was a decisive moment not only in U.S. civil rights history, but also in American history. It resulted in a new determination to move toward equality, freedom and greater employment for people of color.”

According to Height, “The real significance of the march, and the speech, was that it changed attitudes. Righteous indignation against racial discrimination became widespread after the march. It led to a time so full of promise and achievement. You could feel it.”

Less than a year after the march, President Lyndon Johnson signed into law the 1964 Civil Rights Act, which banned discrimination in public facilities, such as hotels and restaurants, and also prohibited employment discrimination. The following year, passage of the Voting Rights Act ensured African Americans could freely exercise their franchise.

In 1968, the Fair Housing Act sought to remove discrimination in buying and renting of housing. That legislation was complemented by new policies, such as affirmative action, designed to counter the legacy of discrimination.

The sweeping legal changes seemed abrupt to some Americans, and U.S. communities struggled to catch up. In a 1963 Newsweek poll, 74 percent of whites said racial integration was “moving too fast,” a viewpoint that seems shocking today when attitudes are very different. By 2000, a New York Times poll reported 93 percent of whites said they would vote for a qualified black presidential candidate. More than 60 percent approved of interracial marriage. And 80 percent said they did not care whether their neighbors were white or black.

The dream King expressed at the March on Washington is now part of the U.S. political mainstream. His birthday is a national holiday on which Americans honor his ideas and his memory. His legacy is commemorated with a memorial in the nation’s capital, near those dedicated to Abraham Lincoln, Thomas Jefferson and Franklin Delano Roosevelt.

King’s dream of racial equality and fight for justice transcended U.S. borders. He traveled the world proclaiming his vision of the “beloved community” and defining racism as a worldwide evil. He was awarded the Nobel Peace Prize in 1964.

In his 1967 book, Where Do We Go From Here: Chaos or Community?, King stated that, “Among the moral imperatives of our time, we are challenged to work all over the world with unshakable determination to wipe out the last vestiges of racism .… Racism is no mere American phenomenon. Its vicious grasp knows no geographical boundaries.”

Even on the day of his “I Have a Dream” speech, when he was addressing Americans in particular, King was conscious of the worldwide impact of the march and its message. “As television beamed the image of this extraordinary gathering across the borders and oceans,” he said, “everyone who believed in man’s capacity to better himself had a moment of inspiration and confidence in the future of the human race.”

The universal significance of the events of August 28, 1963, was underscored by Height. “Wherever I have been in the world these last 40 years, it’s incredible to me how much people know about the Civil Rights Movement and Dr. King — often in very specific detail. The world was watching us on that day,” she says. “The march touched the world as well as America.”