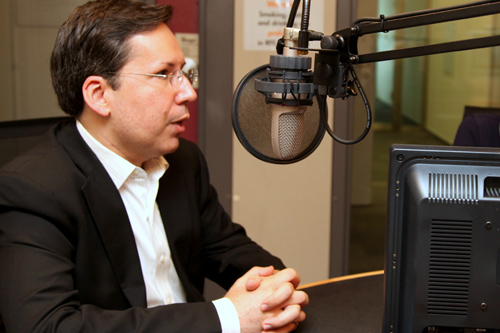 American journalist and author Nicholas Kralev, an expert on U.S. diplomacy and the inner workings of the State Department, visited Prague from April 28-29. During his two-day visit, Kralev met with students of the Foreign Ministry’s Diplomatic Academy, Charles University’s American Studies Department, and the University of Economics. His visit was covered by local media outlets Lidove Noviny and Czech Radio, as well as Radio Free Europe’s Moldovan and Ukrainian services.

“I was lucky enough to personally meet with all secretaries of state from George Shultz to John Kerry,” said Kralev, who has been given unprecedented access to the inner sanctum of American diplomacy in Washington and around the world over several years.

In Prague, Kralev also discussed his recent book, America’s Other Army, which is based on his visits to more than 50 embassies and interviews with 600 career diplomats, as well as Hillary Clinton, Condoleezza Rice, Colin Powell and Madeleine Albright. For a decade, Kralev traveled with these U.S. secretaries of state to over 80 countries as a newspaper correspondent.