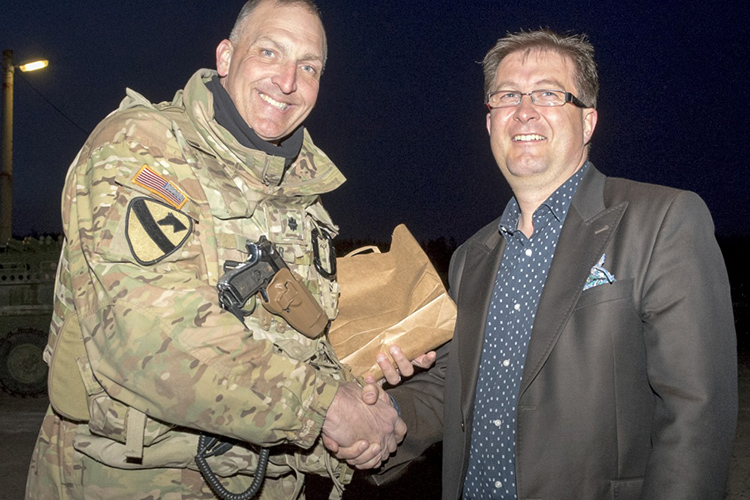 Hynek Homolka, deputy mayor of Brandýs nad Labem-Stará Boleslav, Czech Republic, greets Lt. Col. Steven Gventer, commander of Battle Group Poland, March 25 to welcome the U.S. Army and other members of the unique NATO formation as they stop in the Czech Republic on their way to Poland.

A convoy which was part of NATO’s Enhanced Forward Presence mission transited through the Czech Republic last weekend. It was conducted based upon the conclusions of last year’s NATO summit in Warsaw to strengthen military presence in the eastern part of the Alliance – in Estonia, Latvia, Lithuania, and Poland. On Saturday, the convoy divided into seven parts and departed barracks in Vilseck, Germany, crossing borders in Rozvadov and heading to the barracks in Stara Boleslav where 550 soldiers of the U.S. and British armies and 125 vehicles stayed overnight. They continued on to Poland on Sunday.

COL Burbank noted that freedom of movement is a critical part of NATO’s ability to defend the Alliance: “To complete our mission effectively, the Alliance forces must be able to assemble and move quickly to where they are needed. A movement like this one shows how effectively we can conduct this difficult task and how critical teamwork is among partner nations in accomplishing this mission.”

According to U.S. Army CPT Andrew Jordan, the main aim is cooperation between allied armies and to train in joint transfer, along with a several month long exercise in Poland: “The goal is to enhance the Alliance. We work on interoperability, making sure radio systems work together, that we can recover vehicles together; we drive together, we refuel together. So it is really enhancing the Alliance, to be interoperable with different systems and understand how each part works. And when we reach Poland, the goal and mission is to train together.”

SGT Andrew Smith described the atmosphere during the ride: “We saw a lot of people waving at us along the road; it was very exciting to see that amount of people.” He added, “This is not my first time to the Czech Republic; I’ve been to Prague several times. The Czech Republic is really a nice place to visit and a lot of nice things around here to see.”

The Czech Army built a tent camp in the Stara Boleslav barracks. Soldiers had everything they needed – dining space, bedrooms, and other facilities – in 38 tents and several containers. “The Czech Army’s Logistics Agency provides support not only to the Czech military at home and abroad, but also to the armies of the Alliance in Czech territory,” said COL Kolomy. He also added: “In cooperation with other services of the Czech Army and the Military Police, we are capable of providing the necessary logistic support in a relatively short period of time to NATO units and missions on Czech territory and thus contribute to our joint security and stability.”