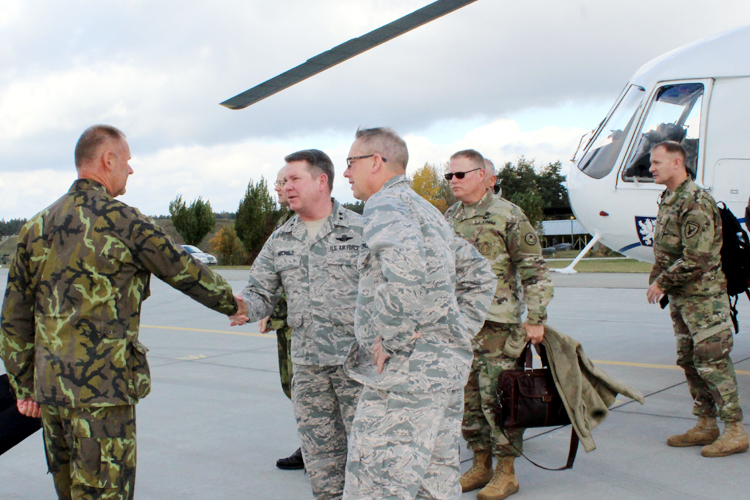 The National Guard commanders from Texas and Nebraska Major General John F. Nichols and Major-General Daryl L. Bohac visited the Czech Republic from November 1 to 6 as part of their Senior Leader visit and support for the State Partnership Program. The program of the began with a meeting with the first deputy Chief of General Staff Lieutenant General Jiří Baloun, Ministry of Defense, and meetings with representatives of the Military Police headed by Chief Brigadier General Pavel Kriz and Brigadier General Josef Kopecký, the commander of the Training Command Military Academy Vyškov.

The US commanders also visited 24th Air Transportation Base at Prague-Kbely 22 Helicopter Base at Namest nad Oslavou, 102nd Reconnaissance Battalion Prostejov, 7th mechanized brigade in Hranice and 21st Tactical Air Force Base in Caslav to highlight the cooperation and efforts between each state and the Czech Armed Forces.

During these meetings, they discussed the experiences of joint exercises in recent years and plans for 2017 and 2018 which will include small unit exchanges, exercises in both the Czech Republic as well as in the states of Nebraska and Texas.

The Czech and US troops will jointly focus on training in an international environment, the sharing of military art and experiences in missions abroad, partnership units of ground forces with advanced training with forward air controllers, flight simulator training in the performance of missions in defense of the airspace as well as support for ground forces, air reconnaissance or in-flight refueling.

Czech military cooperation with both the National Guard states has a history of over 20 years as it was launched in 1993 in what is called the partnership for peace, before the Czech Republic’s entry into NATO, and successfully continued under the State Partnership Program.