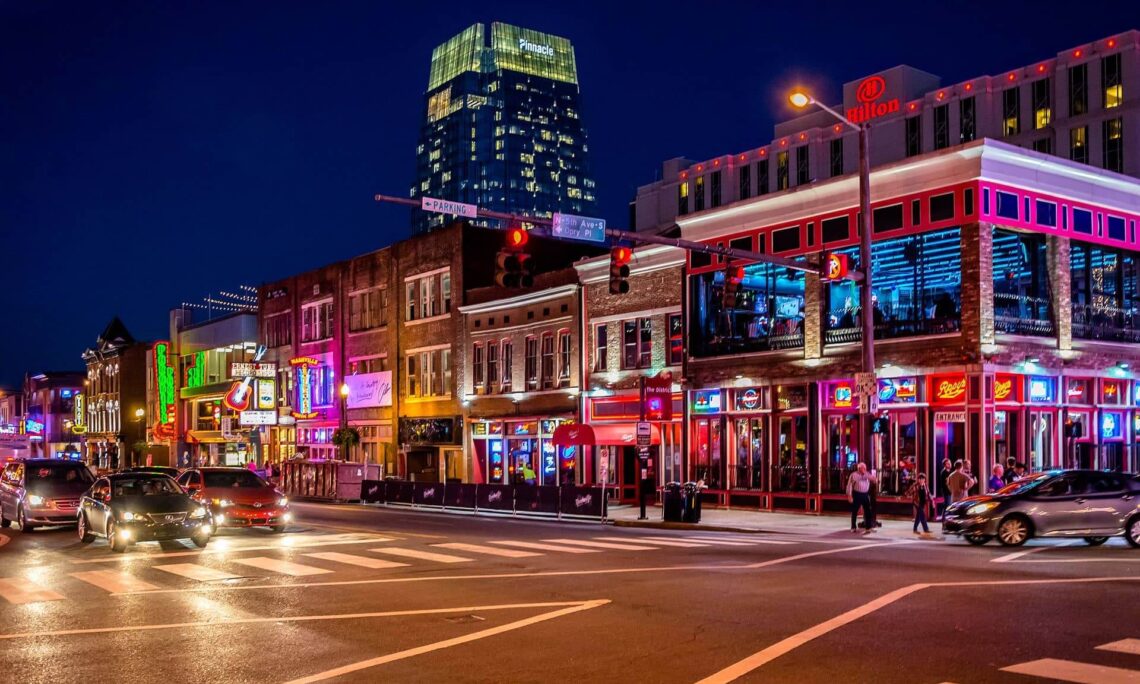 Nashville is the capital city of the state of Tennessee. Since the 19th century it has been called the Music City. The first musical act to do an around-the-world tour was the Fisk Jubilee Singers from Nashville’s Fisk University. In fact, upon playing for the Queen of England, the queen stated the Fisk Jubilee Singers must come from a “City of Music.” In the 1930s, not far from Fisk University, Jefferson Street was quickly becoming a hub for entertainment, music, and nightlife. In the 1960s, Jimi Hendrix and Billy Cox held residency at Club Del Morocco on Jefferson Street, the district which is credited with the emergence of Nashville’s R&B music.

The most famous music venue in Nashville, the Ryman Auditorium, was built in 1892. When it opened it was the largest auditorium south of the Ohio River. It is nicknamed the “Carnegie Hall of the South.” In 1925, the establishment of radio station WSM and its launch of the broadcast that would be called the Grand Ole Opry further secured Nashville’s reputation as a musical center. The Music Mile is a roadway connecting the Symphony Center with the music district of Music Row, the vibrant new entertainment venues on Demonbreun Street, the Country Music Hall of Fame and Museum, the Music City Walk of Fame, and the Bridgestone Arena. Many visitors to Nashville attend live performances of the Grand Ole Opry, the world’s longest-running live radio show.

Nashville has many arts centers and museums including the Frist Art Museum, Cheekwood Botanical Garden and Museum of Art, the Tennessee State Museum, the Johnny Cash Museum, Fisk University’s Van Vechten and Aaron Douglas Galleries, Vanderbilt University’s Fine Art Gallery, and the National Museum of African American Music. Nashville’s Centennial Park is home to the only replica of the Greek Parthenon, which is why Nashville is sometimes called the “Athens of the South.” The sculpture of Athena inside the Parthenon is the tallest indoor sculpture in the western hemisphere at 42 feet high.

Three major professional sport teams call Nashville their home city – the Nashville Soccer Club, the American football team the Tennessee Titans, and the NHL hockey team the Nashville Predators. The Predators have won two division championships and one conference championship. The Predators also brought back a victory from the NHL Global Series in Prague, Czech Republic in October 2022. The team plays its home games at Bridgestone Arena, which also serves as a venue for large-scale musical productions and performances.

Some of the more popular types of local cuisine include hot chicken, hot fish, slow-roasted barbecue, meat and three, biscuits, and of course, bourbon, whiskey, and Bushwackers.

What are some interesting facts?

Nashville was named after American Revolutionary war hero Francis Nash. It was founded by James Robertson, John Donelson, and a party of the Overmountain Men on Christmas Eve 1779. President Richard Nixon performed on the Grand Ole Opry during its first show at the new Opry House in 1974. He played “God Bless America” on the piano. Two of the United States’ presidents – Andrew Jackson and James K. Polk – lived in the Nashville area.

And what is the Czech connection? Did you know that there are two Czech companies that decided to set up in Nashville?

GZ Media decided to build its North American headquarters and the world’s most advanced vinyl manufacturing facility in Nashville because it is a key hub for the music industry and home to major labels, distribution centers, and recording studios. Nashville has its own charm and you can hear music at every corner. Michal Šterba, the CEO of GZ Media said he considers Nashville the coolest city in the United States.

Petr Furch, the CEO of Furch Guitars, said, “Nashville was a number one choice for us when selecting our new US base. Not only does it continue to strengthen its position as the music hub of the United States, but the city also offers a good infrastructure for new business growth. An evening of great music in the bars on Broadway then has to be a unique experience for any visitor to Nashville, and not just for guitar enthusiasts.”