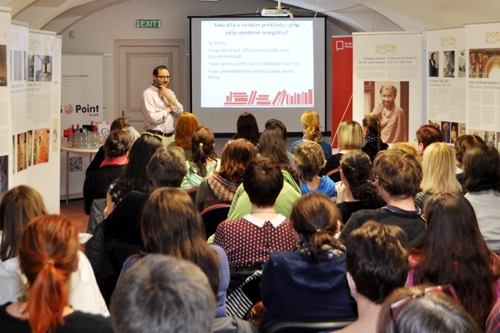 Richard Olehla lectures about the contemporary trends in American Literature at the Gallery of the European House in Pilsen.

The Scientific Library of the Plzen Region, the U.S. Embassy, and the U.S. Point at University of West Bohemia co-organized a literary evening on March 24, exploring the contemporary trends in American Literature as perceived both in the U.S., and the Czech Republic.

Richard Olehla, American Studies expert, university teacher and journalist, examined the main themes in American literature of the past decades, and explained how Czech publishing houses choose American authors and books for translation and publishing. He introduced the most important titles that have recently appeared on the Czech book market.

The Gallery of the European House was full and the audience stayed to ask questions long after the program ended. The event was part of Meeting Literature project, one of the accompanying programs of Plzen Capital of Culture 2015.