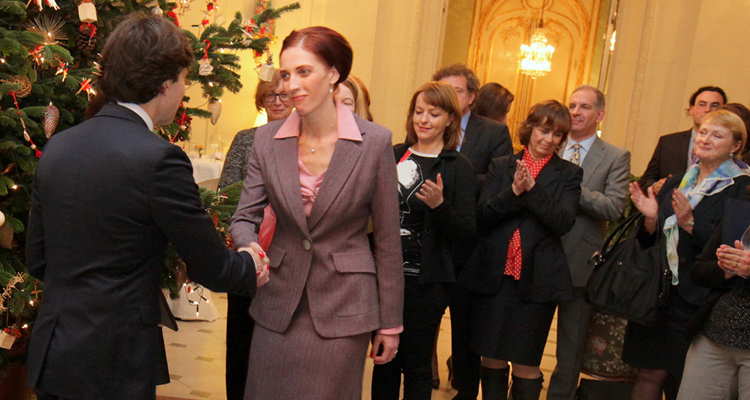 On the occasion of the anniversary of International Human Rights Day (December 10), U.S. Ambassador to the Czech Republic Andrew H. Schapiro presented on December 9 the Alice Garrigue Masaryk Award to Marie Gottfriedová, Director of the elementary school in Trmice, for successfully implementing and advocating for inclusive education in the Czech Republic.

“As the director of the Trmice elementary school, Marie Gottfriedová for the past ten years has made inclusive education a priority. She believes that each pupil should be treated as an individual, regardless of their background, including access to teachers or special assistants to ensure that the individual needs of each student are met. Thanks to Marie Gottfriedová, the Trmice elementary school successfully meets this priority. She and past recipients of this award remind us by their actions that human rights are not merely lofty, abstract ideas. They are principles that demand action, and that, when put into action, create a safer, more democratic, and more prosperous world,” said Ambassador Schapiro during the ceremony.

In 2004, the U.S. Embassy in Prague established the Alice Garrigue Masaryk Award to recognize persons and institutions in the Czech Republic who have made an exceptional and continuing contribution to the advancement of human rights in the country through the courageous promotion of social justice and defense of democratic liberties.

The award is presented annually and is named in honor of Alice Garrigue Masaryk, the pre-eminent Czech-American and founder of the Czechoslovak Red Cross, as a tribute to her devotion in combating social injustice and her personal courage in standing up for human rights. Alice G. Masaryk is among the great symbols of the history our two countries share, and exemplifies the Czech Republic’s long-standing commitment to human rights, including civic and political rights, at home and abroad.

The Embassy established the Alice Garrigue Masaryk Award in 2004 to recognize persons and institutions in the Czech Republic who have made exceptional and continuing contributions to the advancement of human rights through courageous promotion of social justice, the defense of democratic liberties and an open civil society.

The award is named for Alice Garrigue Masaryk, a pre-eminent Czech-American and founder of the Czechoslovak Red Cross. Alice G. Masaryk is among the great symbols of the interwoven history our two countries share. Her courage while unjustly imprisoned by the Austro-Hungarian Empire, her determination to achieve equal rights for women, and her stand against the Communist takeover of the country served as inspiration for her countrymen.