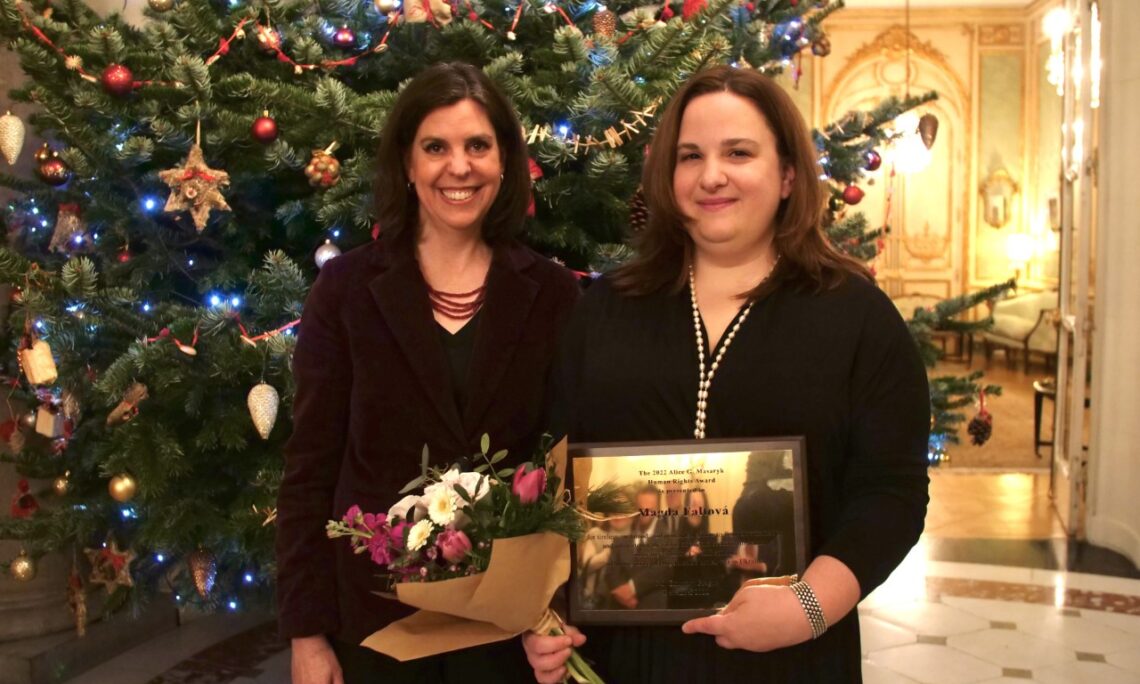 On December 14, Chargé d’affaires, a.i. Christy Agor presented U.S. Embassy Prague’s annual Alice Garrigue Masaryk Human Rights Award to prominent human rights activist Magda Faltová, director of the Association for Integration and Migration, for her relentless fight for the rights of asylum seekers, migrants, and refugees, as well as against discrimination in Czech society.  She has served as the director of the NGO Association for Integration and Migration (SIMI) since 2009 and played leading roles during the 2015 migrant crisis, supporting those leaving Afghanistan in 2021, and during this year’s unprecedented influx of refugees from Ukraine as a result of Russia’s brutal war.  In addition to her work with migrants, Faltová also has been an advocate for women’s rights, foreigners’ rights, and the rights of detainees.  She has worked in this field for more than 17 years.

The Chargé recognized Faltová for her “tireless, sustained, and principled efforts to fight discrimination and to advocate for the rights of asylum seekers, migrants, and refugees in the Czech Republic, including those fleeing Russia’s brutal war in Ukraine” on the recommendation of the U.S. Embassy’s Human Rights Award committee.

In her remarks, Chargé Agor remembered one of the awardees who has passed away few days ago – 2017 awardee Čeněk Růžička.  The activist and the Director of the Committee for the Redress of the Roma Holocaust was awarded for his powerful and persistent advocacy for a dignified memorial at the site of the Lety concentration camp.

The U.S. Embassy established the annual Alice Garrigue Masaryk Award in 2004 to recognize people and institutions in the Czech Republic for significant accomplishments in the field of human rights.  The award’s namesake, Alice Garrigue Masaryk, was a prominent Czech-American humanitarian and founder of the Czechoslovak Red Cross.  The award serves as a tribute to her devotion to combating social injustice and her personal courage as displayed in her advocacy for human rights.  The award is presented in connection with International Human Rights Day on December 10.