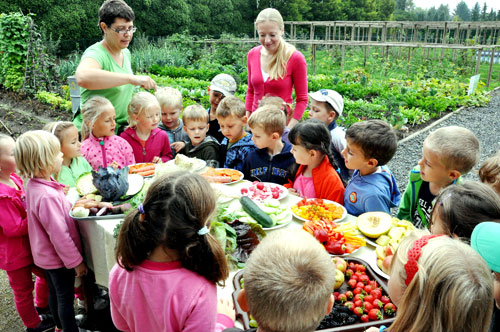 A group of children from the Pruhonice Pre-school joined us for the fruit and vegetable garden harvest.

This project is connected to First Lady Michelle Obama’s initiatives (Let’s Move and the Kitchen Garden of the White House,) and the U.S. Department of Agriculture (Peoples’ Garden) aimed at community gardening, a healthier lifestyle, and sustainability with a focus on the general public, schools and pre-schools.  Since 2011, the Foreign Agricultural Service office of the U.S. Embassy in Prague has partnered on this project with the Dendrological Park of the Silva Tarouca Research Institute for Landscape and Ornamental Gardening in Pruhonice.

This year the Dendrological Park introduced to the public a brand new Consumer Garden with ancient apple varieties and some other less known fruit trees.  They designated a small fig house for thermophilic fruits and installed trellises for grapes and for less known small-fruit kiwi.  For comparison, there are several varieties of strawberries, raspberries, currants and gooseberries displayed.  On vegetable patches, besides the traditional and popular varieties, there are also some that are less known by the general public. The Consumer Garden uses  sustainable set up and maintenance practices.

The Garden Project is co-sponsored by the U.S. Department of Agriculture.  For more information, please visit www.aic.cz/zahradka andwww.dendrologickazahrada.cz.