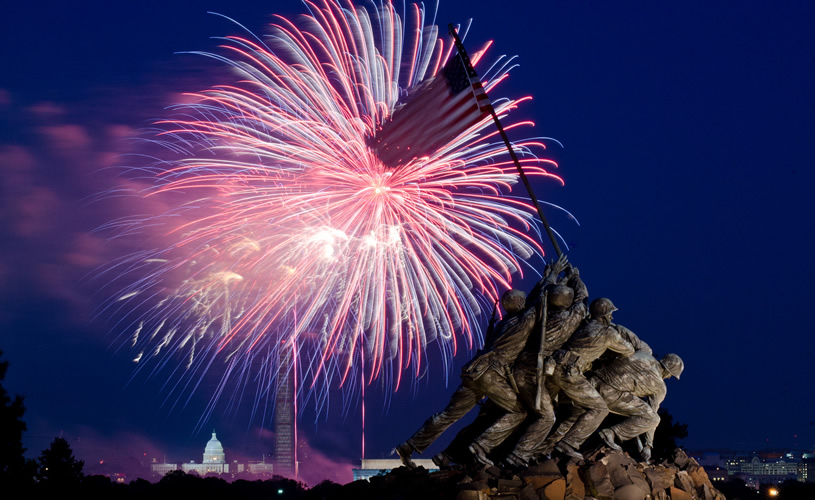 Fireworks are seen from the U.S. Marine Corps Memorial area, in Arlington, Va. on July 4, 2013.

The United States celebrates the formation of the world’s oldest democracy each year on the fourth of July. On this day in 1776 the Second Continental Congress adopted the Declaration of Independence, which asserted America’s independence by declaring some of the basic rights of man and listing grievances against the British Empire.

America’s birthday is celebrated by traditional activities such as parades, concerts, picnics, and fireworks displays.

The U.S. Embassy in Prague host the traditional Independence Day reception at the Ambassador’s residence in Prague. Among the distinguished guests are Czech politicians, academics and foreign diplomats.

During communism, Czech dissidents were also among those who were invited, as former Czech President Václav Havel recalled in an interview for the U.S. Embassy in January 2009.

Excerpt from the Declaration of Independence

“. . . We hold these truths to be self-evident, that all men are created equal, that they are endowed by their Creator with certain unalienable Rights, that among these are Life, Liberty and the pursuit of Happiness.–That to secure these rights, Governments are instituted among Men, deriving their just powers from the consent of the governed, –That whenever any Form of Government becomes destructive of these ends, it is the Right of the People to alter or to abolish it, and to institute new Government, laying its foundation on such principles and organizing its powers in such form, as to them shall seem most likely to effect their Safety and Happiness. . . .”

You can read a transcription of the complete text of the Declaration on Archives.gov.