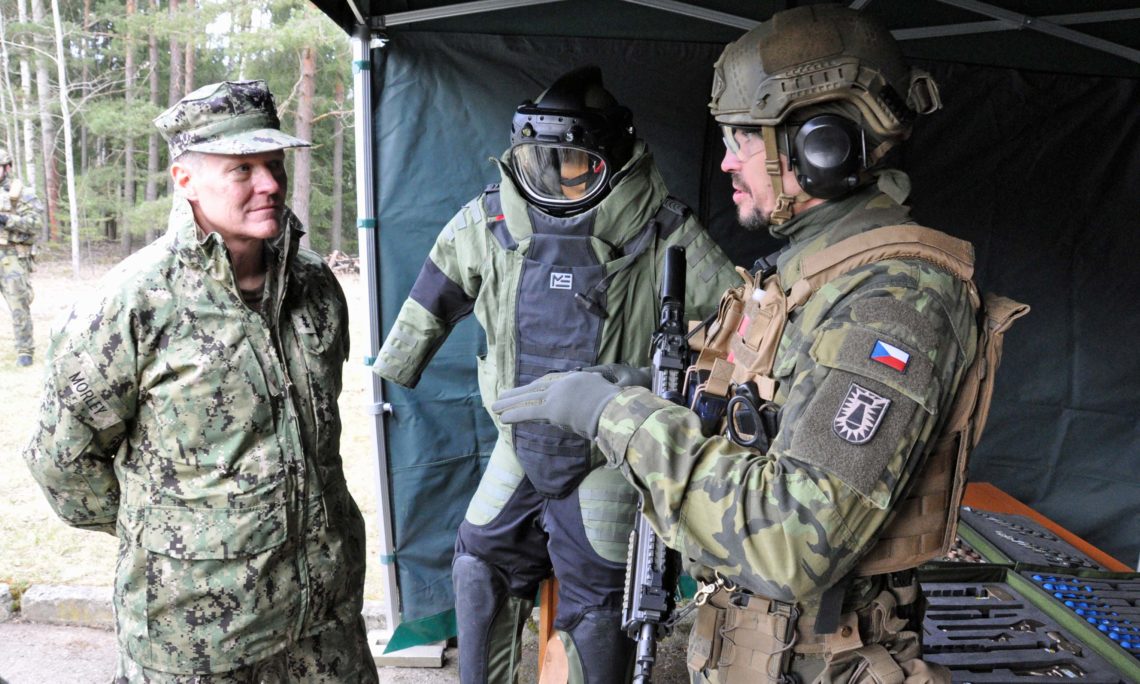 Members of the explosive disposal unit of the Bechyně engineer base received the last items in a grant from the U.S. The Army of the Czech Republic received almost four and a half million U.S. dollars worth of materiel from two foreign cooperation programs (Foreign Military Financing and the Global Train and Equip Program) aimed at granting security assistance to key allies.

Specialized equipment, selected on the basis of the requirements of the Army of the Czech Republic, will serve to build its capabilities to support coalition operations abroad. The ceremonial handover of the equipment was attended by Czech Army Major General Ivo Střecha, Director of the MoD Force Development Division, and on the American side by Rear Admiral Francis Morley, Director of the Navy International Programs Office, together with representatives of the US Embassy in Prague. “I consider it essential to have the same techniques, training and procedures in foreign operations. This has worked very well in our joint operations in Afghanistan,” remarked Admiral Morley.

Both projects originated within the framework of bilateral cooperation in 1996 between the armies of the Czech Republic and the United States. The engineer troops have been using various security assistance grant programs to modernize their equipment since 2010. “This project was approved in 2017. The first delivery was in 2018.  That materiel is used to support the U.S. Army EOD Company, which in turn supports Czech troops responsible for security of the Bagram Ground Defense Area,” added General Střecha.  Explosive Ordnance Disposal, (EOD or bomb experts) are still operating there, embedded in the U.S. Army EOD Company.

Equipment not only for missions

This equipment is primarily intended for foreign operations with allies.  Detection devices and robots with detectors are designed for EOD soldiers whowill support chemical units assigned to NATO’s Rapid Reaction Force (NRF) next year. Some of the detectors, such as metals and explosives, will also be used to clean up former military areas. The equipment will also be available to support the Integrated Rescue System.

Not only materiel but also training

The delivery of specialized materiel included robots to support EOD, various types of radiation, gas and chemical detectors, conductor detectors, night vision devices, helmets for EOD operators, and software for reporting incidents involving explosives. The project also includes training on the operation of robots. “We have superbly trained specialists who are in high demand within the Alliance. With the materiel we have acquired, we are raising this ability to another level,” commented General Staff COL Jiří Tršo, commander of the 15th Engineer Regiment in Bechyně.

Under the FMF program, the Army of the Czech Republic acquired equipment for its specialists in four similar projects.