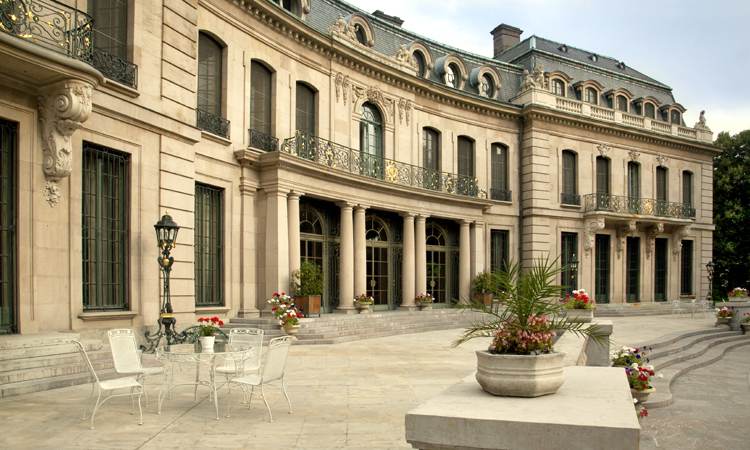 The exterior of the mansion, built in the late 1920s. (photo U.S. Embassy Prague)

The Residence of the U.S. Ambassador in Prague was built in the late 1920’s, during the brief flowering of the first republic of Czechoslovakia, by Otto Petschek, the patriarch of one of the wealthiest families in the country. The Petscheks were a German-speaking Jewish family, and their wealth was in large part from coal mine holdings and banking.

While the mansion was being built, the family lived in the present Deputy Chief of Mission’s residence. The Petschek grandparents continued to live there after the rest of the family moved into their new home during the winter of 1929-1930. The Staff-house next door was in those days occupied by other Petschek relatives. Otto Petschek became ill and died in 1934.

In 1938, as the Nazi threat to peace in Europe and specifically toward Czechoslovakia became plain, the Petschek family (a son and three daughters) sold their holdings in Czechoslovakia and departed for the United States, where members of the family still live. Two of the children have visited Prague and the home where they spent their youth, commenting that very little has changed at the Residence.

After the Nazis occupied Prague, they seized the house and until May 1945, it was the residence of General Toussaint, the head of the German army occupying Prague. A considerable number of Nazi aides and soldiers were quartered on the property during this seven-year period.

When the Germans were driven from Prague, the Residence was occupied by the Soviet Army for several days. Their stay was sufficiantly short that not a great deal of damage was done, although some valuable fur coats, ballgowns, china and silverware were destroyed or stolen.

The next occupant was the Czechoslovak General Staff, which used the property as Staff Headquarters. During German, Soviet, and Czechoslovak military usage, little was done to maintain the property.

In September 1945, American Ambassador Laurence Steinhardt leased the Residence from the Czechoslovak Ministry of National Defense. Under the terms of the lease, rental was subject to yearly renewal, and the Ministry was obligated to make certain repairs. The Ministry of National Defense turned over the property to the City of Prague, but the city government did not want to assume the obligations connected with the transfer.

While many of the furnishings in the Residence are original, some came from confiscated estates. In 1945, the Office of the Czechoslovak Prime Minister took over hundreds of properties from expelled Sudeten Germans and others. The furniture and furnishings from those properties were in many cases distributed to existing estates in Prague. 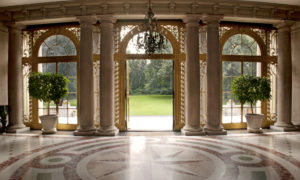 An interior view of the Ambassadors' Residence in Prague. (photo U.S. Embassy Prague)

Furnishings received by the US Government were shared between the Chancery and the Residence. When negotiations for American acquisition of the Petschek residence were underway, Ambassador Steinhardt included all the furnishings received from the Czechoslovak Government in the sales agreement.

The Residence, the Deputy Chief of Mission’s house, and the Staff-house were purchased on July 20, 1948 for $1,570,000. At the same time, the Consulate General building in Central Bratislava was purchased for $150,000. This contract was signed by the Minister of Finance, representing the Czechoslovak Government. This total cost of $1,720,000 for all properties did not represent any dollar expenditures to the US Government. The amount was credited to the Czechoslovak government against surplus property debts to the US Government.

After the Communist accession to power in 1948, and the ensuing sharp deterioration of US-Czechoslovak relations, assets and credits were frozen, and the Czechoslovak Government ceased payment on surplus property debts. This entire account, along with various other debts and financial claims, was included in the 1982 Gold Claims agreement between the US and Czechoslovakia. Thus, because of the way the debts and claims were finally handled, the Residence was acquired without any actual loss to the US Treasury The Petschek family filed a claim for reimbursement for the property and received compensation they deemed appropriate from the Czech government.

Stories about the Residence abound, and in these it is difficult to separate fact from fiction. The indoor swimming pool, for example, is said to have been used during only one winter. When one of the Petschek sisters swam in it, caught pneumonia and nearly died, her father decreed that the pool should never be used again. Another account holds that a family member dived in and broke a leg, which resulted in the paternal decree. Another explanation for the pools’ disuse—a less dramatic one offered by a family member—is that the pool was too expensive to heat, even for an owner of coal mines.

Another story concerns the Petscheks’ devoted butler, who lived in the Residence Gate House (now occupied by Embassy staff). When the family left for America, the butler buried the family silver in the back garden and left it there until 1948 when the US Government purchased the Residence. At that time he dug it up again and presented it to Ambassador Steinhardt as the representative of the country in which the Petscheks had made their new home.

During the communist period, and especially in the 1980’s, the Residence was frequently visited by dissidents, who were invited by Ambassadors William Luers, Julian Niemczyk and others to U.S.-hosted meetings and social events. President Vaclav Havel has described how he was once arrested two blocks from the residence on his way home from one of these events.

The house was designed and built without guestrooms. Mr. Petschek’s own apartment (now the apartment of an Embassy staff member) was on the top floor. The family lived on the second floor and the downstairs rooms were for entertaining guests, as they are today.