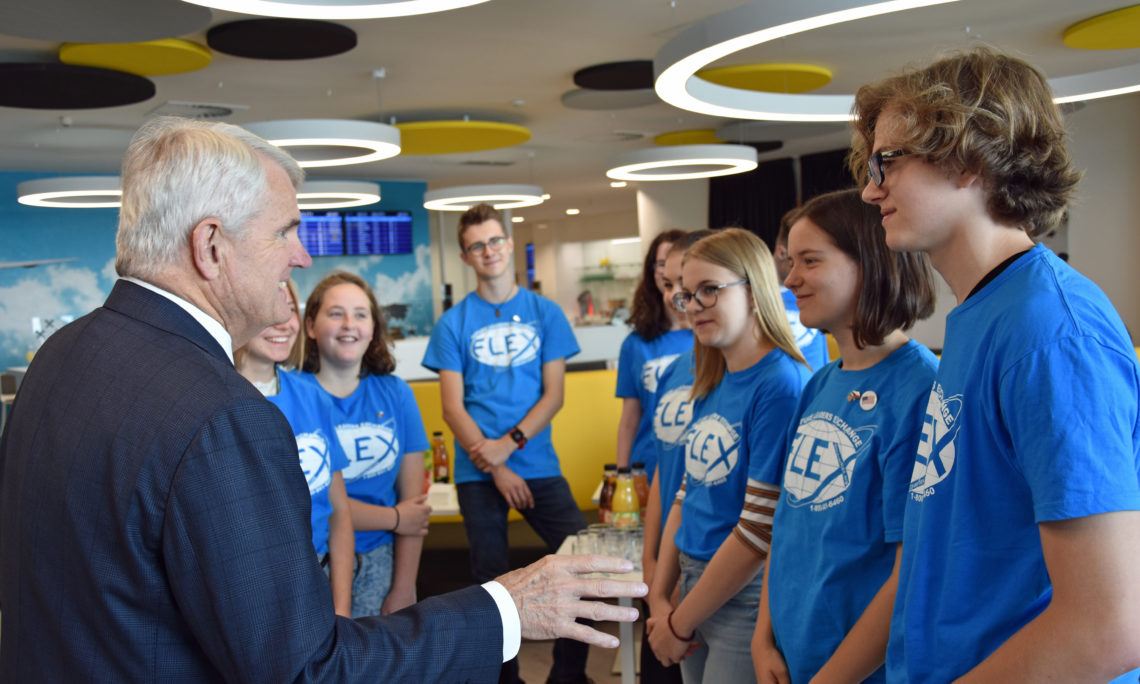 A full academic year of study at an American high school while living with a host family awaits a group of students who left today for the United States.  They were among those successful in competing for a scholarship from the Future Leaders Exchange (FLEX) program, which is fully funded by the U.S.-government.  For their departure from the Vaclav Havel Airport in Prague U.S. Ambassador to the Czech Republic Stephen King greeted the students personally and wished them well.

The FLEX program accepts secondary school students from 21 countries in Europe and Asia.  The Czech Republic is sending its very first group of students on this program to the United States this summer, alongside Greece, Hungary, and Slovakia.

While meeting the departing students at Prague Airport, Ambassador King said: “I am excited for you and the life-changing experiences that you will have over the next year.  The FLEX program is a great opportunity for students to learn about America and for America to learn about the Czech Republic.  You will not only complete a full academic year at selected U.S. high schools, but will also live with American host families, which is an incredible experience.”

In total, 760 students applied last year.  In its inaugural year, the first ten FLEX scholarships for Czech secondary school students were awarded in a challenging two-round competition that lasted from October to May.  Katerina Šantúrová, the FLEX Program Coordinator in the Czech Republic, said:  “After submitting an online application in the fall, one hundred students proceeded to a semi-final round held in Brno and Prague in January.  The applicants went through in-person interviews, wrote essays, took an English-language test, and submitted a detailed application, including a teacher’s recommendation.”

A selection committee based in Washington, DC, then picked the students most qualified for FLEX.  One student each was accepted from eight regions: Prague, South Bohemia, South Moravia, Liberec, Moravian-Silesian, Olomouc, Plzen, and Central Bohemia; and two students qualified from the Vysocina Region.”  They will spend their American year in communities in Arkansas, Florida, Iowa, Maine, New York, and Wisconsin – which happens to be Ambassador King’s home state.   He added: “I am proud of these exceptional students.  They will be outstanding ‘Czech ambassadors’ to the United States.”

The FLEX program was established in 1992, and funding is provided through the U.S. Department of State’s Bureau of Educational and Cultural Affairs.  The primary goal is to improve mutual understanding and develop and strengthen long-term relationships between citizens of the United States and other peoples and countries.  The State Department supports exchanges for secondary school students from over 50 countries through FLEX and other academic year programs.  Since the program’s first students traveled to the United States in 1993, over 26,300 students have participated in the FLEX program.