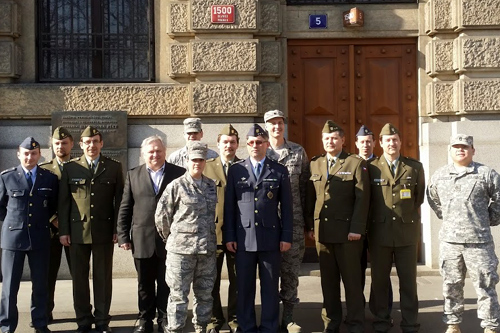 Czech and U.S. participants of a Cyber Defense Exchange in Prague.

On 17-19 March the Czech CIS (Communications and Information Systems Agency) and members of the Nebraska and Texas Air and Army National Guard conducted a Cyber Defense Exchange at the Hotel DAP. This exchange was a part of the State Partnership Program which has been going on in the Czech Republic since 1993.

The Czechs and Americans exchanged Tactics, Techniques, and Procedures (TTPs) on the increasingly important domain of Cyber Defense. Topics such as Information Assurance, Boundary Defense and Vulnerability Management were discussed and lessons learned through experience were detailed. Each group left the exchange feeling like they had learned something new, shared valuable information and moved the State Partnership Program to a higher level.

The Czech CIS team were great hosts and their US Counterparts were very grateful for their hospitality. The exchange strengthened the bond of the State Partnership Program and helped to create a path for future cooperation in Cyber Defense in the Czech Republic.