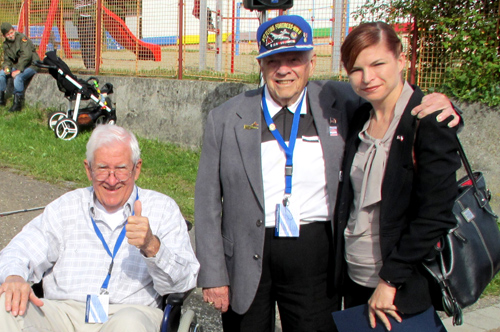 Cultural Attaché Sherry Keneson-Hall represented the U.S. Embassy at events in the Zlin Region on August 30, commemorating the 70th Anniversary of the air battle over White Carpathian Mountains, during which 10 American planes were downed and 41 U.S. airmen lost their lives.  This battle belongs to the most important WWII events in the region.

Local authorities, organizations and citizens jointly organized a series of events commemorating the 70th anniversary and honoring the fallen soldiers. Two U.S. veterans of the battle, Loy Dickinson and Chuck Childs (both over 90 years old), made the long trip overseas and took part in the events.

The rich program included commemoration at the Monument in Šanov and visit to the local Museum of the Air Battle, program in the Museum in Bojkovice, including launching of a book related to the historical events of 1944, a ceremony in Přečkovice at a family house where one of the soldiers was hiding with the Pešát family, unveiling a monument at the cemetery in Rudice where two U.S. soldiers were burried in 1944.

The day was concluded by a field Memorial Service near Rudice celebrated by Archbishop of Olomouc Msg. Jan Graubner. Hundreds of local citizens attended the events, taked to the veterans, laid flowers and exchanged memories.