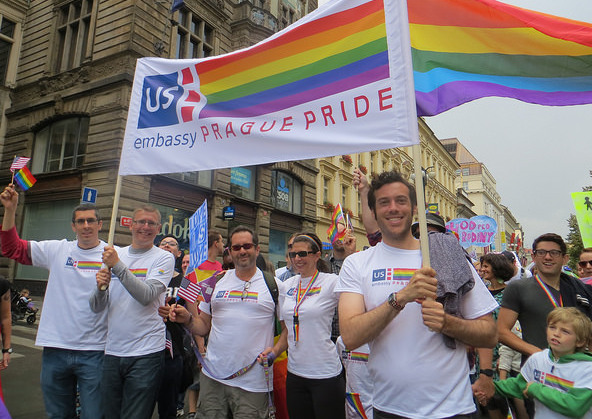 Chargé d’Affaires Steven Kashkett and a team of others from the U.S. Embassy Prague marched in support of Prague Pride.

The US Embassy fourth year supported the Prague Pride festival, which this year took place in the week of August 11 and focused on the differences between East and West. The aim was, among other things show people from countries that are less open to the community of gays, lesbians, bisexuals and transsexuals that elsewhere there are more accommodating attitude towards their sexual orientation. During the festival, held more than 100 events and some of them directly participated in the embassy. On the occasion of the official opening of the Prague Pride was on Monday, August 11 colors of the rainbow again lit in the garden gloriette embassy in Mala Strana. The American Center in the embassy held discussions with gay diplomats regarding their experiences from around the world. Conducted screening of the film „Milk“ and „bohemians“. Embassy officials zúčastili Prague Pride march.