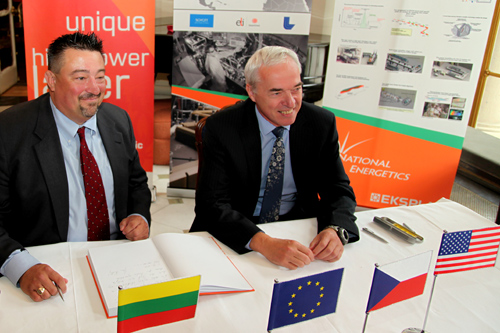 Institute of Physics of the Academy of Sciences of the Czech Republic has awarded contract for development and delivery of top-class 10-PW laser system to a US-European consortium led by National Energetics (USA), in partnership with EKSPLA (Lithuania), and with major subcontractors being Lawrence Livermore National Laboratory (USA) and Schott (Germany-USA).

The 10-PW laser system will be one of the key technology elements of the ELI Beamlines facility. As designed, the laser will utilize most advanced laser and optical technology available in the world.  The role of each member of the consortium will be different in development of the laser system.

The National Energetics will deliver advanced high-energy laser amplifiers and other laser subsystems and will be responsible for the integration of the complete laser chain; EKSPLA will supply pump units for the front end section of the laser as well as the laser power supplies, Lawrence Livermore National Laboratory will manufacture very large state-of-the-art diffraction gratings for the pulse compression to 10 PW peak power, and Schott will fabricate the special glass for amplifying the laser pulses to large energies.

The laser team of ELI Beamlines at the Institute of Physics will actively participate on development of several subsystems of the laser.  The 10-PW laser will be commissioned in the ELI Beamlines facility in December 2017 and will be primarily used for fundamental research. It will be a unique instrument in the world that will serve broad Czech and international community of users.

The collaborative projects prepared by the ELI Beamlines with the use of this laser involve for instance experiments in the fields of laboratory astrophysics, high-field physics, quantum electrodynamics to start measuring the texture of vacuum, particle acceleration, and nonlinear plasma physics.