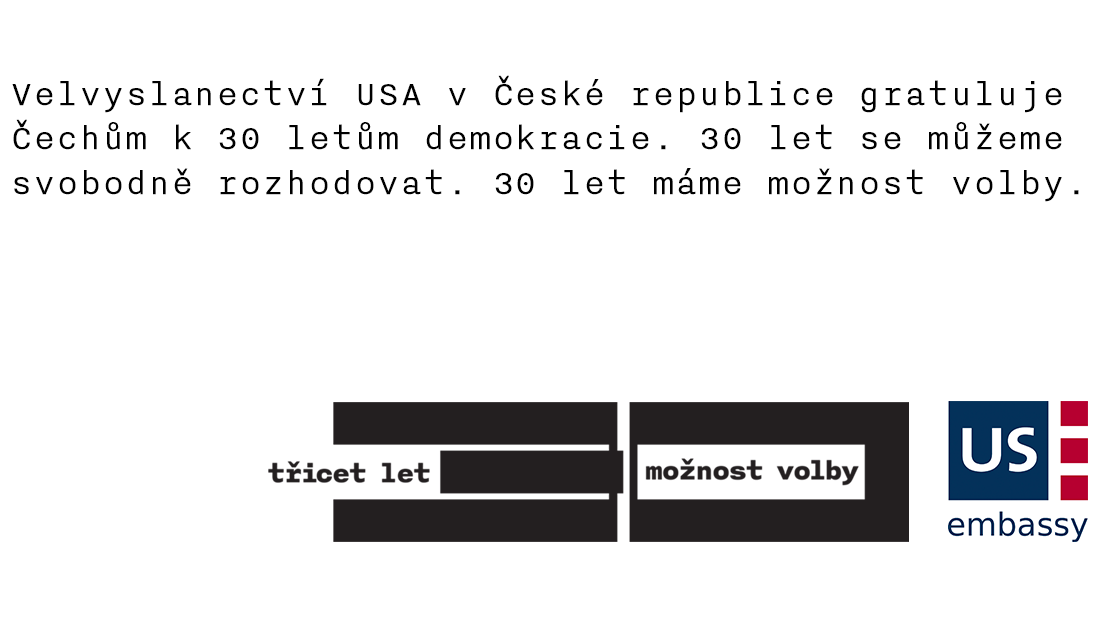 The U.S. Embassy in the Czech Republic is proud to participate in celebrating the 30th anniversary of the Velvet Revolution. The Campaign Možnost Volby (Freedom of Choice), which is supported by the Embassy, congratulates Czechs on three decades of democracy. Installations in three cities present compelling stories of Czechs who, since the fall of Communism, have been able to realize their dreams and ambitions. The campaign seeks to reach Czechs not only in Prague but throughout the country, and is focused on the Moravian-Silesian, Karlovy Vary, and Ústí regions.

The campaign is designed and implemented by the Konektor marketing agency. “We move away from traditional clichés and with humor we point out all the possibilities and joys that the Czechs have within their reach,” says Rudolf Kvíz, executive director of Konektor Social. “We are saying that freedom and democracy are not a matter of course and must not be forgotten even during material welfare,” Kviz continues.

The campaign runs both online and offline. Two online profiles have been launched. The main profile on Facebook bears the campaign title Possibility of Choice, and presents short regional stories of change “for the better” since 1989, including interviews with people associated with the Moravian-Silesian, Karlovy Vary, and Usti regions. Their link is the relationship to the region in which they live and where they try to improve their surroundings. Experienced journalist and Czech Emmy Award winner Tomáš Etzler and Zuzana Válková, a former long-time editor of the Economia publishing house, prepared the regional stories and interviews with Martin Hausenblas, Zlatá Holušová, Jaroslav Vyčichlo and many others. Roman Franc, a successful photographer who photographed Václav Havel and other famous subjects in the past, took the campaign photographs.

In order to reach a broad audience and remind them of the values they fought for in 1989, the Konektor agency developed a physical exhibition, which will travel to shopping centers in the selected regions. The exhibition will include the above-mentioned interviews and regional stories, as well as a replica of the Statue of Liberty.

Journalist Tomáš Etzler described his motivations: “The freedoms gained during the Velvet Revolution allowed me to live a life that would not be possible under Communist rule. Therefore, I welcomed the opportunity to work on the project. Millions of lives changed for the better after November 1989, and it was a pleasure to hear some of their stories and highlight them. We should talk often about the changes that the revolution has brought us. Freedom is not for free.”

The campaign Facebook profile, which shows examples of how life has improved since 1989, is complemented by humorous, parody profiles aimed at engaging younger audiences. For example, a profile of the Czechoslovak Socialist Press Office (ČSSTK) develops the idea of an alternative reality,

showing how news may appear under censorship. An Instagram profile also shows the young generation, which did not experience life before 1989, humorous visions of a fictitious, alternative reality of the Czechoslovak Socialist Republic.

Influencers Lukáš Hejlík, Petr Florian (Pedrogamescz), Mariana Prachařová and others will support the campaign by communicating about different themes of interest to their audiences on Instagram, Facebook, and YouTube.