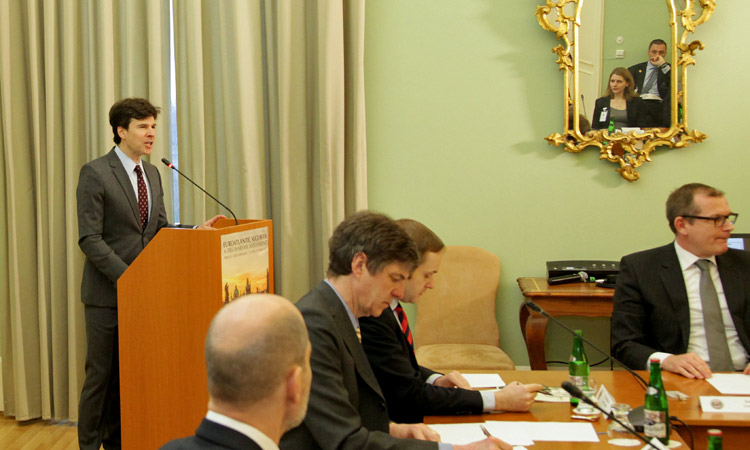 The Ministry of Foreign Affairs of the Czech Republic, the George C. Marshall European Center for Security Studies, the U. S. Embassy in the Czech Republic, and the Prague IIR Institute conducted a seminar “Euro-Atlantic Security: A Pre-Warsaw Assessment” in Prague 29 February-1 March.

Over 60 senior security officials and experts from the Czech Republic, many other European countries and the U.S. analyzed current issues in Euro-Atlantic security, including Russia and the Ukraine conflict, ISIL and conflict in the Middle East, migration, and the upcoming NATO summit in Warsaw.  Opening speakers for the seminar were U.S. Ambassador Andrew H. Schapiro, German Ambassador Dr. Arndt Freiherr Freytag von Loringhoven, Czech Deputy Minister of Foreign Affairs Jakub Kulhanek and Czech Ambassador to NATO Jiri Sedivy.

“Certainly this is an extremely topical and timely conference,” the U.S. Ambassador said, and continued, alluding to the refugee crisis:  “The alliance that we represent is not just an alliance about military force or even about our interests, but also about our values that are worth of fighting for and that we are protecting. … It is important to remember that the world is not a safer place when we turn inward. It is not better for the world if we refuse to be engaged. This conference is a great example of that.”