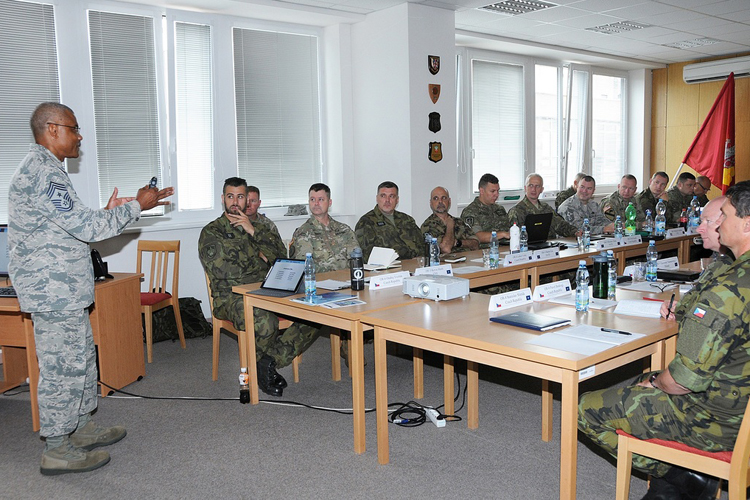 Twenty four top enlisted leaders from the Czech Republic, Slovakia, Hungary, Poland, Texas, Nebraska, NATO School and NATO ACT presented and discussed a wide range of NCOs related topics, such as future development of NCO Corps, mutual cooperation in the area of education and training, challenges connected with the management of enlisted force and sharing of educational and training capacities.

The group was welcomed by Deputy Commandant of the Military Academy, Colonel Petr Svoboda, who emphasized the importance of NCOs in modern professional armed forces. Following that, the Command Senior Enlisted Leader of the Czech Armed Forces, Command Sergeant Major Petr Seifert welcomed participants of the seminar and introduced participants his goals set for the event and stressed out that the main topic of the seminar was mutual future cooperation and development.

Command Sergeant Major Seifert was followed by the NATO ACT Command Senior Enlisted Leader Command Chief Master Sergeant Jack Johnson who familiarized participants with possible future strategic and operational environment in which NCOs would have to operate and explained his perception of the NATO NCO Bi-SC Strategic Command Strategy and NCO Guidelines and implications for the possible future requirements placed on NCOs in order to stay relevant and effective on the current and future battlefield.

The rest of the first day of the seminar was focused on the Command Senior Enlisted Leaders’ briefings presenting the current a planned status of the enlisted force of their respective country and state.

The second day was NCO Academies/NCO Departments topics oriented. Commandants and senior NCOs in charge of departments presented their perspectives on the development of their institutions, topics related to an adjustment of the non-commissioned officers developmental programmes and implementation of the NATO NCO Bi-SC Strategic Command Strategy and NCO Guidelines in the national environment.

The seminar was concluded with a recognition of Corporal Lukas Mrocek, a member of the Czech 25th Air Defence Regiment for his achievement during the Best Soldier competition he participated in earlier this year. He placed 2nd overall in the competition. Deputy Commandant of the Nebraska State National Guard Regional Training Institute First Sergeant James Mckeehan presented Corporal Mrocek with a commemorative plaque and coin for his achievement.