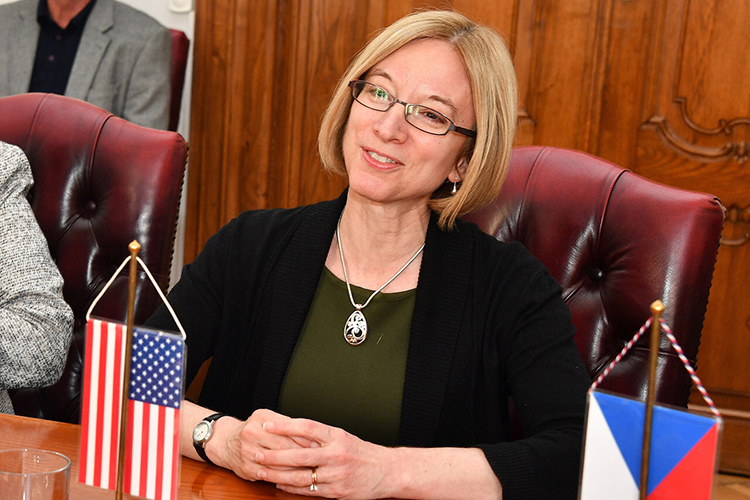 On May 18—19, Chargé d’Affaires Kelly Adams-Smith paid an official visit to Brno. Her two-day trip started at the Matyas Lerch Gymnasium where she addressed more than 100 students in an interactive presentation on U.S.-Czech relations, human rights issues, security and economic partnership between the two countries. She then met over lunch with Deputy Supreme Public Prosecutor Jiri Pavlik and two other prosecutors to discuss the role of public prosecutors in the Czech executive system, their role in solving corruption cases and participation of women in Czech prosecution.

She continued with a tour of AT&T’s Brno Center and participated in a teleconference with the Global Network Operations Centre in Badminster. The Chargé concluded her first day in Brno with a tour of Tugendhat Villa, a UNESCO cultural monument.

The program next morning was devoted to a guided tour of the Museum of Roma Culture and the follow-up discussion with Moravian Roma community leaders who expressed gratitude for the U.S. Embassy solidarity with their cause. The Chargé then hosted a lunch for three Brno-based IVLP alumni who described how their participation in IVLP programs in the United States influenced their respective careers.

The Charge concluded her stay in Brno with a meeting with Lord Mayor Petr Vokral. The Mayor expressed hope for more U.S. investment in the city and praised cooperation with the U.S.—Czech Chamber of Commerce. He informed the Charge about Brno’s preparations for next year’s 100th anniversary of Czechoslovakia and 100 years of the Czech— U.S. partnership.