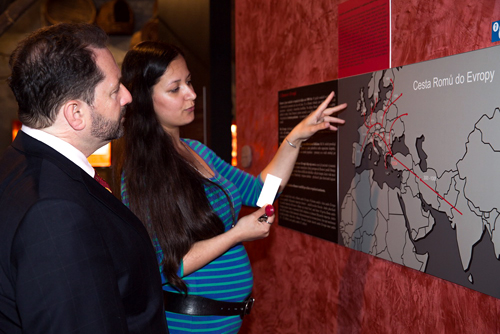 Chargé d'Affaires Steven Kashkett tours the Museum of Romani Culture in Brno with Head of the Museum’s PR Alica Herakova.

On April 28th and 29th, Chargé d’Affaires Steven Kashkett traveled to Brno on an official visit. While in the Czech Republic’s second largest city he met with Mayor Roman Onderka to discuss cooperation with the city.

The trip was divided between Science and Human rights programs. On the science front, he planted a tree in honor of Earth Day at the Open Garden Education Center of Partnerstvi, met with Faculty members from Masaryk University’s Energy Security Studies Department, and attended the opening of CzechGlobe — the Global Change Research Center.

On the Human Rights side he visited the Museum of Romani Culture and read names of victims of the Holocaust in the Moravske Namesti during the Remembrance Day event.