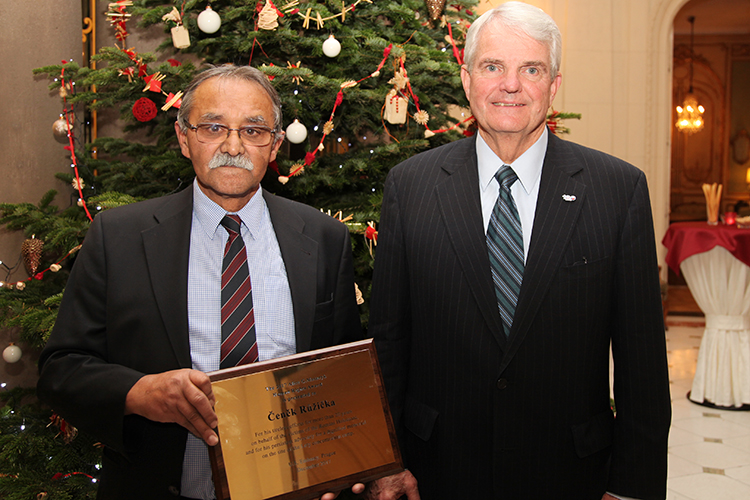 Laureate of the 2017 Alice Garrigue Masaryk Award Čeněk Růžička with U.S. Ambassador to the Czech Republic Stephen King at the ceremony held on December 8, 2017 at U.S. Ambassadors' residence.

“Čeněk Růžička is the recipient of our award for his tireless advocacy of Roma Holocaust victims and his decades-long struggle for a dignified memorial on the site of the Lety concentration camp,” said Ambassador King during the ceremony at his residence in Prague 6.

In 2015, Mr. Ruzicka and his colleagues created a unique exhibition project called “Lety – Story of a Forgotten Genocide.” The exhibition raised awareness among legislators and the general public, and created a dialogue on how to come terms with the historical trauma of the Roma Holocaust.

It is thanks to the activities and work of Mr. Ruzicka and many other activists including Minister Herman and former Minister Dienstbier that the current Czech government has come to an agreement with the owners of the pig farm to remove it and build instead a dignified monument to the Roma victims who suffered and died at Lety.

As a part of these education efforts, Mr. Ruzicka also regularly speaks to students about Roma history.

In 2004, the U.S. Embassy in Prague established the Alice Garrigue Masaryk Award to recognize persons and institutions in the Czech Republic who have made an exceptional and continuing contribution to the advancement of human rights in the country through the courageous promotion of social justice and defense of democratic liberties. The award is presented annually and is named in honor of Alice Garrigue Masaryk, prominent Czech-American humanitarian and founder of the Czechoslovak Red Cross, as a tribute to her devotion in combating social injustice and her personal courage in standing up for human rights. Alice G. Masaryk is among the great symbols of the history our two countries share, and exemplifies the Czech Republic’s long-standing commitment to human rights, including civic and political rights, at home and abroad.