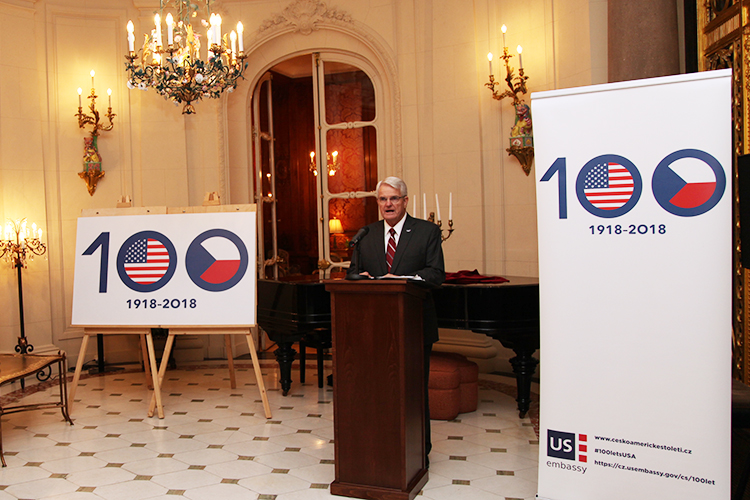 Ambassador King launches the Centennial of U.S.-Czech Relations at the U.S. Ambassadors' residence on December 11, 2017.

In 2018, the U.S. Embassy in Prague will celebrate one hundred years of bilateral relations between the United States and the Czech Republic. It was U.S. President Woodrow Wilson and his administration that proved instrumental to Tomas Garrigue Masaryk’s project to form a new and independent Czechoslovak state in 1918. Masaryk and other prominent Czechs and Slovaks visited the United States to signed the Pittsburgh Agreement on May 31, 1918.

During a gala Centennial Reception at his residence on December 11, U.S. Ambassador Stephen King told the guests that “America’s connection to the Czech Republic runs much deeper and further than those early days of the Czechoslovak state. Fundamentally, our people are allies, partners and friends. On the commercial side, the United States is one of the largest foreign direct investors here, creating thousands of Czech jobs. Our partnership also runs deep in the areas of education, research, and culture. Last year, the Fulbright Commission in the Czech Republic celebrated a quarter-century of work supporting academic exchanges. After the fall of the Berlin Wall and the Velvet Revolution, the United States supported the Czech Republic in building or re-building its democratic institutions.”

The Embassy plans to celebrate the bilateral partnership through a multitude of events and initiatives in 2018. A centennial grant fund has already awarded funding to a dozen Czech organizations for projects that will take place throughout 2018; these initiatives include conferences, exhibitions, and performances that recognize and explore the U.S.-Czech partnership. A “Centennial Award” in 2018 will recognize Czech citizens who have contributed significantly to the advancement of the bilateral relationship. Each month next year will be dedicated to a particular aspect of the U.S.-Czech relationship — science and technology cooperation (in January); sports, in particular baseball (in April); World War II commemorations (in May); and our strong security partnership (during NATO Days in September).

As part of the Centennial Reception, Ambassador King formally launched the Embassy’s centennial logo, which highlights the 100-year anniversary of U.S.-Czech relations. On January 1st, 2018, the Embassy will also launch websites dedicated to the centennial. More at cz.usembassy.gov/centennial.