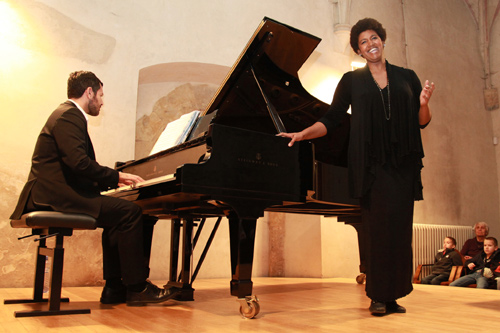 American soprano Nicole Taylor performs with piano accompaniment by Daniel Ernst at the Church of Saint Lawrence in Malá Strana.

On February 17, American soprano Nicole Taylor performed at the Church of Saint Lawrence in Malá Strana in Prague on the occasion of her European tour celebrating African-American History Month.

Her performance with piano accompaniment by Daniel Ernst, Press Attache of the U.S. Embassy, continues a musical tradition begun five years ago, when Nicole first performed in the Middle East under the sponsorship of the U.S. Department of State as an Arts Envoy.

At the concert, Nicole Taylor beautifully sang African American spirituals (traditionally called Negro Spirituals), a musical form indigenous and specific to the religious experience of Africans and their descendants in the United States.

An 18th & 19th century precursor to the Gospel music of the 20th century, Negro Spirituals are a result of the interaction between music and religion from Africa and Europe. The religious folk songs draw primarily on biblical texts and are sung in dialect, communicating profound devotion with a surprising simplicity and directness. Their focus on personal freedom makes them universal songs, since everyone on the planet, in one way or another wants to be free.

The roots of modern American pop, rock, rhythm & blues, jazz, and gospel music are traced to Spirituals. Their influence has extended to the works of great composers including Antonín Dvořák, Erich Korngold, Alexander Zemlinsky, and George Gershwin.

American soprano Nicole Taylor performs at the Church of Saint Lawrence in Malá Strana in Prague on February 17, 2015 on the occasion of her European tour celebrating African-American History Month.