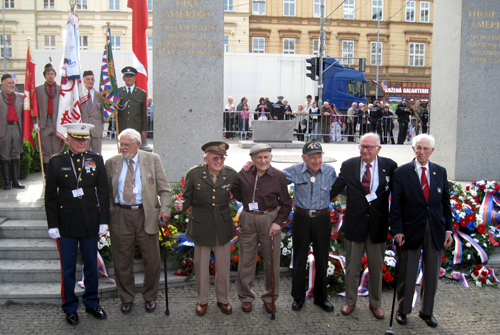 U.S. veterans pose for media in front of the Thank You America! memorial.

On May 6, U.S. Embassy Deputy Chief of Mission Steven Kashkett participated in events commemorating the U.S. Third Army’s liberation of Pilsen at the end of the World War Two. Twelve American veterans and their families traveled to the  western Bohemia capital to join Belgian comrades and local citizens in honoring the men and women who sacrificed their lives in the name of freedom.

In his speech, Mr. Kashkett said that these commemoration events take place to remind us of our debt owed to those brave American and allied troops who liberated the city from its occupiers 69 years ago:

“While we can never repay the debt we owe those fighting men and women, the one thing we can do is remember their sacrifice. Sixty nine years ago, those brave young soldiers were involved in one of the bloodiest wars in human history. This continent was scarred by a war, itself fueled by aggression and political ideologies that did not value liberty, justice, or respect for basic human rights and dignities. And let’s not forget that those individuals who lost their lives were not just faceless soldiers, but individuals with mothers, fathers, and dreams for the future.

This beautiful monument, erected by the Czech people, reminds us of the service of those soldiers who entered the enemy-occupied city of Pilsen on a spring day in 1945.” He also added that the United States and the Czech Republic remain steadfast allies and partners “as we and other nations confront new challenges to peace and security, some very near to our doorstep. We thank the Czech Republic for its work within the EU to help stabilize the situation in Ukraine economically, financially, and politically, and for its support of Ukraine’s democracy, unity, and people. Upholding the basic principles of sovereignty and territorial integrity for other countries is paramount for peace in the 21st century. Nineteenth century geopolitical aggression has no place in today’s world.”